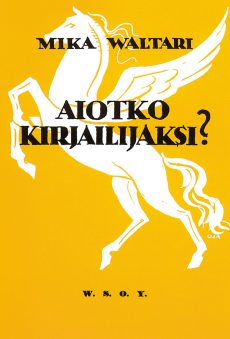 Do You Want to Be a Writer?

The great Mika Waltari’s guidebook to becoming an author.

In this non-fiction guidebook, Mika Waltari teaches his reader how to become an author.

Including tips on developing your own writing style, choosing the right topic to write about, and dealing with publishers—as well as a charming section on choosing the right typewriter — it has long been considered a must-read for anyone who wants to make it as an author.

The author Kalle Päätalo is said to have read this book before embarking upon his own career as an author.

“Do You Want to be a Writer? is a fun read. As a writer, I admire Waltari for his versatility, productivity, knowledge of humankind, immediacy, humour and uncompromising style. This guide to writing is… stylistically natural and humorous. Almost every page of it made me smile.” — Tuulin viemää blog