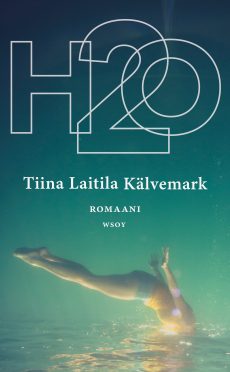 In the tradition of Maja Lunde’s climate fiction comes this suspenseful, immersive Finnish novel about what lies beneath the surface.

Hester lives in a flood-stricken town whose dams have failed. A thirtysomething woman, she free-dives for fun and struggles to manage her multiple personalities, which she has suppressed for years. There’s Ophelia, the hydrophobic control freak, promiscuous Honey, and domineering Hanna P.

When her stepfather, a dam-builder, becomes terminally ill, Hester resolves to find out what truly happened in her family that New Year’s Eve twenty years ago, when everything changed. She embarks on a personal odyssey, uncovering dark revelations—told in flashbacks—that force her to confront memories she didn’t even know she had, and begin listening to her own voice.

The narrative then turns to Ofelia’s point-of-view, and we learn that Hester’s relationship with her beloved grandmother is much more complicated and shocking than she has ever admitted to herself. Can Hester make peace with the past before her stepfather dies? And what about Hester’s friend and occasional lover, Oliver?

When Hester dives into the water for the last time and resurfaces, will she finally be able to silence the voices in her head and rise to the surface alone?

Nominated for the Bothnia Prize 2020

“As an author, Laitila Kälvemark is interested in mind games in a way that is reminiscent of Nobel Laureate J. M. Coetzee. In her books, the most important thing is not historical accuracy or identifiable settings, but rather the individual’s journey towards finding answers to the big questions — both internal questions about identity and questions about the time in which we live.” – Vesa Rantama, Helsingin Sanomat

“Laitilia Kälvemark paints a beautiful, sorrowful picture of people torn between life choices, marked by their transitory circumstances… I wouldn’t be at all surprised if this is nominated for the literary awards.” – Ina Ruokolainen, Savon Sanomat newspaper

“The author’s courage to tackle a difficult subject with an open mind is admirable. As is the book’s authenticity: alternate personas affect those living with them by giving them orders and feedback, not just gossip. And yet, or perhaps as a result, the novel’s logic does not suffer; its structure is not broken, and neither is the protagonist’s sense of self.” – Esko Karppanen, Lapin Kansa newspaper

“FEAR OF WATER is [Tiina Laitila Kälvemark’s] fourth book. It tells the story of a woman with many personas. The novel’s events unfold in a fictional Nordic coastal city, which has flooded. Parts of the novel take place in the present, as the protagonist sits beside her dying stepfather in hospital; and other parts take place twenty-years in the past, during the protagonist’s childhood… In writing the novel, Laitila Kälvemark familiarised herself with dissociative identity disorder, a multi-personality disorder that is often caused by severe childhood trauma… Tiina Laitila Kälvemark, who has previously written about feeling side-lined, the plights of the middle classes and issues concerning climate change, incorporates alternate personas into the plot of her latest work.” – Riitta Taulavuori, Kaleva newspaper

“Everyone has their own reality, and lots of us have many, for who doesn’t sometimes feel like a stranger to themself? It is exactly this message that Laitila Kälvemark handles with skill and without underestimating the experiences of a child and their legitimacy.” – Mari Viertola, Turun Sanomat newspaper

“The subject [of FEAR OF WATER] is challenging, but Laitila Kälvemark’s writing is breath-taking and she captures the reader’s imagination with this tragic story… FEAR OF WATER is an impressive, wonderful and touching book.” – Kirjaviekoon blog

“[FEAR OF WATER] takes on the psychological vortex. It dives deep into the labyrinths of the mind – both its light and dark parts. In it, flooding is symbolic. It’s tied not only to the climate crisis but also to people and how they have to build protective dams in order to remain afloat… The book includes some wonderful descriptions of water alongside other flowing narratives. I enjoyed the power of expression implicit in the book’s language and the message that those living with traumas can ultimately drown it.” – Tuijata blog

“Laitila Kälvemark portrays Hester and her multiple personas unbelievably well… Tiina Laitila Kälvemark’s book is definitely worth reading. FEAR OF WATER is a skilfully written book about a tragic story and illness, but it’s also a book about climate change.” – Elämä on ihana blog

“Kälvemark captures the chaos of multiple personalities in Hester’s mind skilfully. This is a fantastic, beautiful, touching story from Kälvemark… FEAR OF WATER is a turbulent and emotional story that sucks readers into its current.” – Kirjaluotsi blog

“Linguistically, structurally, and thematically this is a truly fantastic novel. It is so great that I’m, quietly hoping it is nominated for the Finlandia Prize.” – Reader why blog

“Tiina Laitila Kälvemark surprises us with every one of her books. Each has its own distinct tone, and that is also the case with this work… The book challenges its reader to consider what each of us dares to remember.” – Kirjastokaista blog