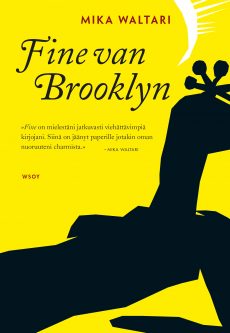 Mika Waltari’s classic novella about a Finnish scientist who looks back on a former ill-fated love affair with a Dutch woman in Brittany.

Fine van Brooklyn tells the story of a Finnish scientist who took a research trip to Brittany in his youth. On his trip he met a young Dutch woman, Fine van Brooklyn, who he immediately fell in love with. The woman played hot and cold and, despite hearing that she was a “witch” with a “wicked spirit”, the novella’s protagonist continued to pursue her.

Waltari paints his narrator as a naive man who is blinded by passion. Filled with satire and irony, Fine van Brooklyn is an acerbic and sharp depiction of how a beautiful woman can play with a man’s heart.