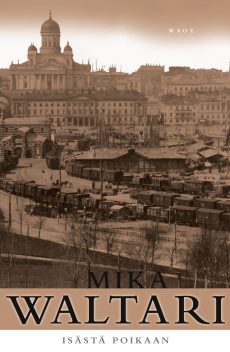 From Father to Son: The Helsinki Trilogy

A collection of Mika Waltari’s much-loved novella trilogy about Helsinki.

Comprising The Man and the Dream, Soul and Flame, and Burning Youth, this collection of abridged Mika Waltari novellas tells the story of Helsinki, through three generations. The stories, which are largely inspired by Waltari’s own family, span many districts of the city. Dealing with themes including the famine years of the 1860s and the immanent threat of war, the protagonist of these novellas are united by the ambitious search for their own paths and a shared longing for a sense of peace.

From Father to Son is a must-read collection that remains as relavent today as it was upon its publication in 1942.