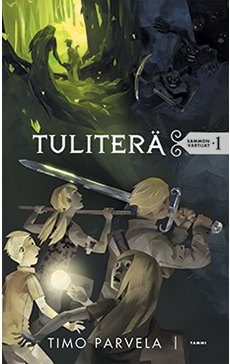 Guardians of the Sampo 1: Fireblade

In the Finnish national epic the Kalevala, the hero Väinämöinen and the witch Louhi fight over the magical device the Sampo, and their struggle ends in the talisman’s destruction. The shards of the Sampo scatter, and Väinämöinen hides the two largest pieces in order to spread prosperity across the entire world. All is well, until …

Fifth-graders Ilmari and Ahti are performing at their primary school graduation. Ahti is playing an instrument Ilmari has tuned: an electric kantele, based on the ancient Finnish instrument. As Ahti starts to play, strange things begin to happen: the principal sinks into the earth! There is something magical about the kantele, and before long everyone wants to get their hands on it.

But Ilmari and Ahti aren’t your average fifth-grade boys, and the disappearance of the boys’ fathers is no coincidence. To their surprise, the boys are heirs to an important role passed down from their fathers: they are guardians of the Sampo. It is the duty of the guardians of the Sampo to protect the Sampo from the forces of evil. And it is no surprise that Louhi, the powerful witch of the North, yearns to claim the Sampo for herself, threatening the entire world.

Fireblade won the Topelius prize in 2007.

Winner of the Topelius Prize, 2007

‘Although Parvela’s book is to be found in the children’s section, it is also recommended for older readers. The story is interestingly narrated and humorous.’ –Uusi Rovaniemi

‘This work, urgently topical in its concerns, is exciting YA fantasy, exceptionally effectively conceived and thought-provoking.’ –Lapsen Maailma magazine

‘Fireblade is a full-blooded fantasy adventure that brings our national mythology up to date, dusting it with youthful energy, magical beings and objects, fast-paced surprises and fresh humour.’ –Kymen Sanomat newspaper

‘Parvela joins the ranks for the interpreters of the Sampo, in a fun way. Folklorists hum and haw; Parvela instead solves the mystery with author’s freedom to speculate. The narrative weaves wonderfully between present and mythological past.’ – Ilkka, newspaper