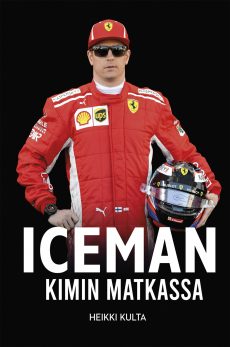 Kimi Räikkönen is, without a doubt, the most internationally known Finn of the 21st century.

A top tier F1 career spanning over two decades is no mean feat and now, as he approaches the home stretch, Kimi has the special honour of being the driver who has competed in the most F1 races ever.

Now, for the first time, Finland’s most experienced F1 journalist Heikki Kulta, whose own Grand Prix career is even longer than Kimi’s, has written a book about the decades he has spent by Kimi’s side.

Kulta has followed F1, and Kimi’s journey, for years. In Iceman – Kimi Räikkönen’s Journey, he explores Kimi’s emotional journey: from all the races, to his home life, and everything in between.

“Kari Hotakainen wrote his book on Kimi Räikkönen from a clean slate, without knowing much about the area or the subject in advance. Now Finland’s most experienced F1 journalist Heikki Kulta has done the opposite. At over 400 pages long, ICEMAN – KIMI RÄIKKÖNEN’S JOURNEY is a wonderful non-fiction book, written by someone who knows practically everything there is to know about Kimi. Kulta has followed Kimi’s career from the very beginning. He has managed to establish a rare relationship of trust with the F1 star, which is something that shines through in his writing. Reading this book gives you a rare insight into Kimi’s world, but also into the world of F1 journalism.” — Marja Aanipuro, Apu magazine

“ICEMAN – KIMI RÄIKKÖNEN’S JOURNEY is a collation of experienced journalist Heikki Kulta’s memories of Kimi from throughout their extensive, 20 year working relationship. The book has been written from a ‘sports first’ perspective… Räikkönen’s career is detailed from the perspective of someone with decades worth of experience.” — Clas von Bell, Autotoday magazine

“F1 journalist Heikki Kulta has interviewed Kimi Räikkönen, as well as those who play an important role in his career, hundreds of times over the last 20 years. Now he has complied all of the material he has accumulated over the years into an authoritative book, which he calls his own memoir… But Kulta’s new book, ICEMAN – KIMI RÄIKKÖNEN’S JOURNEY is first and foremost about Formula One driver Kimi Räikkönen’s racing career, since Kulta has witnessed so many of his races over the last 20 years. In addition, the book lists all of Räikkönen’s F1 and World Rally Championships with all of their rankings.” — Ismo Uutistupa, Helsingin Sanomat newspaper

“ICEMAN – KIMI RÄIKKÖNEN’S JOURNEY is not just a memoir of Räikkönen, but also the story of a journalist tracing the many decades he has spent following Räikkönen’s career. Kulta has attended as many as 371 F1 races and he’s followed Räikkönen’s journey from his very first race to the Championships and the present day. He has interviewed Räikkönen countless times both inside and outside the F1 pit. He even knows Kimi’s friends and family. Kulta, who has established a reputation as a true gentleman, is one of the only journalists who has been allowed into Räikkönen’s inner circle…. This is an incredibly interesting read for any Formula 1 fan.” — Metsa.net