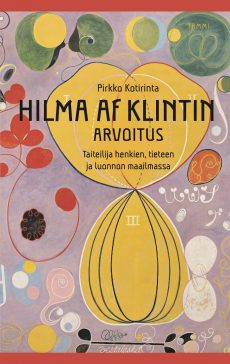 In Search of Hilma af Klint: An Artist of Spiritualism, Science, and the Natural World

75 years after her death, Swedish artist and mystic Hilma af Klint is finally being celebrated as a pioneering abstract painter whose bold works predate Kandinsky’s. Leading culture journalist Pirkko Kotirinta follows in the footsteps of the secretive artist in this ground-breaking and comprehensive biography.

Hilma af Klint was an abstract artist before the term existed, a trailblazing figure who—inspired by spiritualism, modern science, and the natural world—began in 1906 to paint huge, colourful works without precedent in painting.

The subject of a recent record-breaking retrospective at New York’s Guggenheim Museum and Halina Dyrschka’s smash documentary Beyond the Visible, af Klint was for years an all-but-forgotten figure in art historical discourse.

Drawing of decades of archive materials—as well as hundreds of hours of interviews with art historians and those with ties to af Klint—Kotirinta tells af Klint’s story from a perspective the art world has been crying out for. Uncovering fascinating details about af Klint’s involvement with the Edelweiss Society, how Theosophy and Rosicrucianism inspired her, and the controversy surrounding Olaf Sundtsröm cataloguing of her oeuvre, Kotirinta shines a light on one of art’s most mysterious figures.

Pirkko Kotirinta (b. 1958) is a well-known and highly revered Finnish cultural journalist. She has covered art and music for almost 40 years in her role as Culture Editor for Helsingin Sanomat, Finland’s leading broadsheet. Kotirinta has been interested in Hilma af Klint for 30 years, since her debut exhibition at the Suomenlinna Sea Fortress in 1988. In Search of Hilma af Klint is Kotirinta’s debut non-fiction title. She lives with her partner in Helsinki.

“IN SEARCH OF HILMA AF KLINT captures the sense of mystery surrounding the artist through its structure, a combination of a travelogue and detective story… The book is grounded in incredibly thorough research. The longstanding culture journalist’s professionalism and genuine enthusiasm for the topic shines through.”— Marja Lahelma, Helsingin Sanomat newspaper