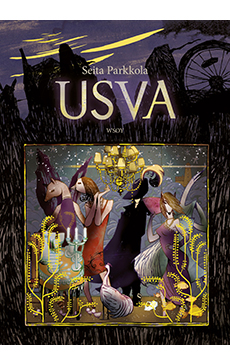 Mist is a breathtaking story about urban battlegrounds and strange struggles for power.

Mist is a story of a girl who has suddenly grown taller than anyone in her class, taller than boys, taller than teachers. She is all limbs, and that’s not easy to handle when you are 13. Mist loses her best friend Evie to who becomes Evil, a feared leader of the gang and her enemy number one. Much to her surprise, Mist gets an invitation to Evie’s wild birthday party held in a flashy department store, Paradise. To her horror, she finds that she is actually one of the party games, not so much a guest. She makes her escape and encounters a strange, pale boy, Puma, who lives in the Store with his mother, the Store’s owner, and cannot go out because of a mysterious illness.A fast-paced adventure is set off in the magical realm of the department store and in the city.

Mist is a fast-paced adventure is set off in the magical realm of the department store and in the grim canalizations beneath the city. The hunting game invented in the classroom comes to a terrible end, that no one can stop from happening.

Parkkola (presently Vuorela) aptly describes the aspects of puberty from the point of view of both the child and the parent. She adds an air of mystification to the age of 13, which she sees as a turning point between childhood and adulthood.

“The troublesfaced by young people are addressed frankly, avoiding the mould of a typical youth novel . Reality and fantasy blend together seamlessly (…)”. – Ilkka, 2009

“Reality and fantasy mix into one, and the narration is most original (…) Mist makes you think and touches your soul.” -Auriina Korhonen, Aamulehti

“Mist is frightfully contemporary. And sharply written (…) Mist has the same makings as Parkkola’s previous novel Storm, but it is even better (…). The narration is at the same time magical and painfully rough. Jani Ikonen’s illustrations are gorgeous starting from the the cover, which is a work of art. ” – Marika Riikonen, Hämeen Sanomat

“I was reading the book hoping that I would have had the chance of it when I was thirteen myself. Parkkola aptly describes this painful age, with tenderness but without beautifying it.  – Kanerva Lehtonen, Virikkeitä