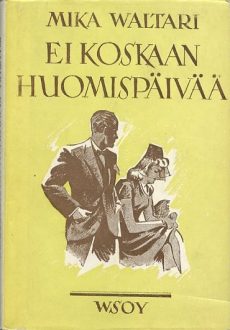 Captain is a thrill-seeking former elite soldier who is in a relationship with his colleague’s wife, Astrid. Never a Tomorrow opens with Captain and Astrid hitting a young boy with their car and hiding his body in the woods. The pair resume their normal lives until the body is discovered.

With the threat of World War Two looming, Astrid grows increasingly paranoid and Captain worries that she’ll confess. Ultimately Captain is confronted with a big moral decision: will he confess his wrongdoing, or will he continue to live a lie?

Never a Tomorrow has been adapted for film three times: by William Maskus in 1957; Arne Mattsson in 1957; and Tuija-Maija Niskanen in 1995.