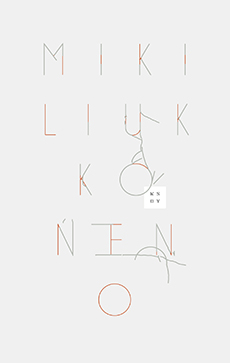 Shortlisted for the 2018 Runeberg Prize, the 2017 Finlandia Prize, and the Bothnia Prize, O is Liukkonen’s magnum opus about ordinary people.

O is about a swimming team preparing for the Olympics, a company designing playground slides with attitude and artistic flair, and a man who flees his neuroses by locking himself in the shed at the bottom of his garden.

O is about how a walk across Copenhagen offers just as much inspiration as a poetry anthology.

O is about Roma men horse trading two hours in the future, thanks to a worm-hole in time.

O is about the life-threatening human experiments carried out by Bach fanatics who think nothing of eliminating anyone standing in their way.

O is about a shy, withdrawn boy who communicates exclusively via the medium of Post-It notes to a junkie living underneath a boat in Spain, who sees a vaulted sky through a hole his the upturned hull that outsiders can only dream of.

O is about taking OCD sufferers by the hand and painstakingly showing them how to make a chicken fricassee.

Whatever else it is, O is a very large book about what the everyday means in our world, and how to live in it.

Miki Liukkonen’s second novel is painted across an outrageously large canvas. It’s a megalomaniacal and encyclopaedic narrative of ordinary people and extraordinary events, neuroses, fixed ideas, and the irrational things that make us shudder. It is about things you have already known have felt, but which you are unlikely to have ever read about in a book .

Miki Liukkonen (b. 1989) made his literary breakthrough with the astonishingly accomplished novel O, an encyclopaedic narrative of ordinary people and extraordinary events, becoming the most talked about literary tour de force in recent years. The novel was shortlisted for the 2017 Finlandia Prize for Fiction, and for the 2018 Runeberg Prize in.

“Almost 1,000 pages, 100 characters, 7 days: this novel by a young Finnish author is an erudite labyrinth, an immensely charismatic beast of a book… The ambition of the project, its scale and its radicalism are as seductive as they are baffling… This book is an epic.” – Le Monde newspaper, France

“Miki Liukkonen’s massive novel O is a towering synthesis of our fragmented era. The overflowing gallery of characters tries to see if curling up in one’s neuroses is of any help when reality does not otherwise seem to stay put within any sensible framework. Excessive self-awareness and a constant flow of information eat away at the characters from the inside, forcing them to fixate obsessively on details, or to disappear entirely into the escapism of alternative functions. Behind the abundance and humour lurks an emptiness, in which the preacher’s voice echoes out, preaching on the vanity of vanities. Despite its massive scale, the novel is not a difficult read. Liukkonen’s language is a precise and a glorious flight of free spirit. In the world of Finnish literature, O is a truly unique case.” – Statement of the Runeberg Prize Jury

“Prose can be described as a collection of sentences that investigates the state of a thing. In this sense, Miki Liukkonen’s novel O is an investigation of the obsessive, neurotic age of the millennial generation, where the search for reason forms a forest in which every tree must be studied. O is stunning in its maximalism. The precision of its language makes the reader chuckle, and the linguistic material used seems inexhaustible. O manages to pique the curiosity of the reader on each of its pages and is unprecedented in the precision of its observations.” – Statement of the Finlandia Fiction Prize Jury

“Miki Liukkonen’s novel O challenges its reader to a prosaic wrestling match – in an ironic way. The massive scale of the work, its excessive weight, endless gallery of characters, countless footnotes and almost deranged immersion into details are alienating but also fascinating. Liukkonen’s narrative reaches something essential about the fragmented lifestyle of our times. O has been described as one of the most important novels of the decade – and with good reason.” – Statement of the Bothnia Prize Jury

“Miki Liukkonen has written one of the most important Finnish fiction books of this decade.” – Helsingin Sanomat newspaper

“Miki Liukkonen is a writer who intoxicates the senses and can immerse the reader in wondrously colour-saturated images and atmospheres… Liukkonen’s lyrical, original sentences, expressing all of their meanings at once, ring out majestically throughout his work… Liukkonen’s gift for creating exclusively potent images isundoubtable, and completely sufficient for creating a great work. But when this uninhibitedly effortless skill is combined with a cool intelligence, as is the case in O, it results in stunning literary power… An ambitious explanation of the world and a sheer display of literary prowess, O has climbed to a high rank on my list of the most important Finnish fiction works of the 2010s, alongside Jaakko Yli-Juonikas’ Neuromaniac and Laura Lindstedt’s Oneiron.” – Juhani Karila, Helsingin Sanomat newspaper

“Open the book to any page and it will offer some kind of epiphany or treat… Although the themes in O are well known from American postmodernism and time is disjointed as in the works of Philip K. Dick, Liukkonen’s virtuosic, magician-like approach and frenzied experimentation make the novel a true original. Rejoice, it declares, literature is not dead!” – Kouvolan Sanomat newspaper

“The entire novel can be described… as a ring-like concatenation of links of people and events that are connected in different but inexorable ways. It sets itself against linear progression of thought, narrative, and plot development… Liukkonen takes detailed descriptions to the extreme and does so impressively, making use of language with varying tones of voice. The work moves from poetic sentimentality to lecherousness, from the laughable to the ridiculous, from the serious to the comical. The language of the novel is a delightful stimulation of the senses… Liukkonen’s novel O is unquestionably a literary event that takes the reader to the other side of imagination and truth.” – Turun Sanomat newspaper

“Liukkonen is an exceptional figure in the Finnish literary field. There is also something un-Finnish about his prose. For this reason, it is some of the best modern prose in Finland… Liukkonen’s imagination and ability to make associations are surprising and original. At its best, the visions, landscapes and chains of events described in O build up into a dense, prose-poetic outpouring, a hysterical intertwining of carnivalesque imagery and language use stimulating all of the senses. With Liukkonen’s treatment, everyday life is contorted in a direction that is often grotesque and surrealistic. Black humour and irony swinging into comical horror are strongly present in the novel from start to finish… One of the greatest strengths of Liukkonen’s prose is its ability to mix a childlike, whimsical sensitivity with a multifaceted spectre of irony. This overarching sensitivity of a blessed and cursed poet brings to mind Arthur Rimbaud… In addition to Houellebecq, Wallace and Rimbaud, Liukkonen’s kindred spirits include James Joyce and Fyodor Dostoyevski. Liukkonen is a world-class author who skilfully distinguishes himself from the stagnant conventions of Finnish prosaic narrative tradition. He creates something new.” – Uljas, University of Eastern Finland newspaper

“O calls into question the relationship between fiction and reality by ironising and disputing realism. The novel has 140 footnotes of commentary that both add to the truthfulness and strengthen the fictiveness of the work. Meandering sentence structures, sentences spanning two pages in places, offshoots and associations demand a lot from the reader but are also greatly rewarding. In literary terms, we would call it an encyclopedic, polyphonic and hypertextual work of post-modern metafiction. Liukkonen’s novel has been compared to American author David Foster’s work Infinite Jest, ‘the book of all books’… O is a playfully fun novel. It is also a penetrating depiction of our time… O’s flowing language and labyrinthine world are enchanting and invite the reader to think of the woven text as a composition. If you want to experience a completely new kind of Finnish prose, you should choose this novel.” – Kaleva newspaper

“The greatest tensions of the novel emerge when there is an error in the information keeping reality together, [the work] performs both a transillumination and an autopsy of this cacophony of weak signals known as the information society.” – Aamulehti newspaper

“O lived up to all its hype and went well beyond, too.” – Also Sprach Jussi blog

“From cover to cover, Miki Liukkonen’s O delivers Finnish literature a delightfully heavy-handed shake-up. The work in question is already one of the most significant achievements of the Finnish literary year, a book that will surely be discussed for a long time to come… O is a slowly progressing novel that devotes itself to its subject matter in an admirably comprehensive way, with a passion reminiscent of [Thomas Pynchon’s] Gravity’s Rainbow – Liukkonen simply tells his reader everything about his characters in his free flowing prose. I have not yet been able to experience such an all-encompassing literary experience that works at such a great scale within the body of Finnish literature. Liukkonen seems to have simply reached a level that no one has even dared to try to get to before – and he manages in an unbelievable way to keep the oscillating work under control… Liukkonen’s prose is beautiful text that lingers in its description of the world.” – Opus Eka blog

“Liukkonen masterfully describes our current era and its problems, of which the greatest is perhaps our relation to time, the passage of time and living within it. Do we exist in the real world or the virtual world? What does it take to exist in time and what problems are caused by keeping or not keeping in time?… I savoured, laughed, and thought; I was impressed and confused. A rewarding, astonishing, fun and wise work, about everything. The book is aptly named: the circle of life is endless, everything is, O… The beginning and end are not important.” – Kulttuuri kukoistaa blog

“A skilful analysis of our fragmented era. Miki Liukkonen has done something that has been long awaited. He has written a magnificent contemporary novel called O, a ‘universal study’ that also delves into history in order to tell what it means to live here and now.” – Kirjasta kirjaan blog

“O is a playfully fun novel. It is also a piercing description of our time… Yet the flowing language and meandering world are enchanting, inspiring the reader to view the woven text as a composition. If you would like to experience an entirely new kind of Finnish prose, you should choose this novel.” – Kirjoituksia blog

“I picked up this book, O, several times before I took it to the checkout counter. I was intimidated by the size of the book (over 850 pages), as well as the positive reviews praising it up and down as some kind of reformer and saviour of Finnish literature. But now, after the two-week-long reading experience, I have to say that this has the potential to be something bigger than just a spring novel… I don’t remember being so delighted by reading since The Famous Five… a mind-bogglingly good novel.” – Uki.nyt blog

“In Liukkonen’s novel, modern life does not come together as a clear story with a beginning and an end, actions and consequences. The book is massive, a cornucopia of information overflow and neuroses as a means of survival. The nature of information has changed. The novel makes you think about how it is no longer important or even possible to determine which information is truer or more important for a person than some other information. A dazzling novel of a new type.” – Kirjojen Suomi, YLE