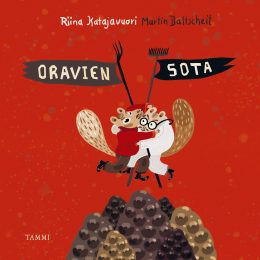 The War of the Squirrels

A stunning picture book in which war, and its causes and consequences, are addressed and revealed—on a child’s level.

The squirrel brothers live in neighboring trees. There are lots of pinecones in older brother’s tree, but the younger brother’s tree isn’t yielding as much. When a harsh winter sets in, the older brother and his friends are happy with what they have, but the younger one and his friends are running out of food. That’s when a big quarrel breaks out. One brother looks to Wolf for help, the other to Bear.

As a promoter of intercultural dialogue, the Goethe-Institut Finnland addressed these questions to Finnish author Riina Katajavuori and German illustrator Martin Baltscheit in 2018 when Finland commemorated the centenary of the country’s Civil War, in which Germany also played a part. This book, a great advocate for reconciliation and peace, is Riina and Martin’s answer.

2022, Nomination for the 2022 Nordic Council Children and Young People’s Literature Prize
2021, Honorary diploma from The Finnish Book Art Committee as one of the most beautiful books of the year

“This animal fable tells the story of the Finnish Civil War of 1918.It bravely tackles a difficult subject – the civil war – which has rarely been dealt with in children’s literature. The War of the Squirrels is an excellent example of what a picture book at its best can achieve. It brings a painful subject closer to the reader and, using the methods of visual literature, it addresses a subject that it’s difficult to find words for and for which text or images on their own do not suffice.” (shortened) – Jury of Nordic Council Children and Young People’s Literature Prize

“A minor dispute that leads to a battle between squirrel brothers provides a universal picture of how conflicts develop. The graphic expression is strong, and in places, even scary. Alongside the characters, the limited colour palette strongly communicates the warlike story, and the interesting images create a tense mood. The spreads are delightfully varied, and the story can be followed like a movie. The book takes on a difficult subject from a new perspective and will give adults goosebumps – in a good way.“  – Jury of the Most Beautiful Book of the Year Prize

“In the prevailing world situation, children’s literature speaks distinctly and with a voice that often stands on the side of democracy, refugee aid and inclusion. …the children’s books do not avoid the difficulties, on the contrary, it seeks them out. ….War of the Squirrels, which powerfully depicts the civil war…is an example of this willingness to treat the incomprehensible…” – HBL newspaper, Mia Österlund, also the chairman of the August Prize children’s book jury

“I knew with absolute certainty that I would never read a book about the Finnish Civil War to my son, a kindergartner. Yet as I scrutinized the children’s book authored by Riina Katajavuori and illustrated by Martin Baltscheit…I came to realize that it’s precisely this kind of book that I need to be able to teach how living beings can fall into wickedness, even toward those they’re close to. Yes, the story in this new release is frightening, but in a safe way. This book, which carries on the valuable tradition of the fable, shows that we are also capable of reconciliation – of peace, with others and ourselves.” – Antti Majander, Helsingin Sanomat newspaper