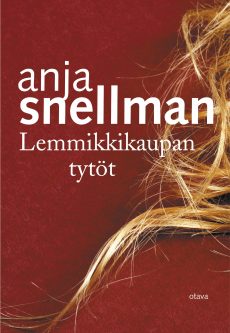 At age fourteen, Jasmin disappears. Her last sighting is at a snack stand, a camel hair coat over her shoulders and a fluffy pet, possibly a chinchilla rabbit, in her arms. The snack vendor also remembers a companion, a gentleman with a brimmed hat that shadowed his face. This lead is not pursued, however, as the vendor is a somewhat suspicious character, rumored to have once staged a burglary of his own business.

Twelve years later, Jasmin tells her story. The calm of Anja Snellman’s poetic language provides a startling contrast to the reality behind the pet shop that teenage Jasmin frequented with her friends: prostitution and trafficking in girls. A world where anything is possible and everything is for sale.

“The novel runs smoothly and skillfully on multiple time levels, driven by several narrators, much like a modern episodic movie.” – Helsingin Sanomat newspaper

“According to Anja Snellman, a comprehensive history of prostitution—or, more prosaically, sex trade—remains unwritten. She has written one, however, and included it in her novel, one of her best.” – Helsingin Sanomat newspaper