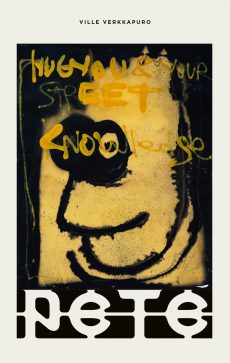 We are kittens raised by dogs.

A tender and hopeful novel about class, addiction and the search for an absent father.

Thirty-year-old Ville is living his best life with a dream job, love, friends – everything in his life is perfect. But like a tattoo on the soul, his father, Pete’s death troubles him. Ville is told that he looks and moves just like his father. Ville sets out on a quest to find out who Pete really was. Through the accounts of others’ memories of Pete, Ville builds a portrait of his absent father to realize that he is neither Pete nor an addict, with some surprising turns along the way.

Taking a deep dive into themes of humanity, addiction, The Simpsons, white trash, Kurt Cobain’s mind, family relationships and the essence of who we really are, PETE is a tender and deeply philosophical autobiographical novel about addiction, the search for a better life and a father who died in uncertain circumstances told with a disarming openness, directness, and warmth. With his working-class roots and autobiographical and unflinching narrative that draw comparisons to Who Killed My Father, Ville Verkkapuro represents a refreshing, new voice from Finland with this acclaimed debut novel.

“The twists in the narrative are sometimes unexpected, and towards the end, the novel expands into an essay that deals with drugs, addiction and self-knowledge from perspectives that are fresh to the reader. Even as a novel, Pete is open to surprises and new forms, making it one of the year’s most inspiring debuts.” – Helsingin Sanomat Debut Prize jury