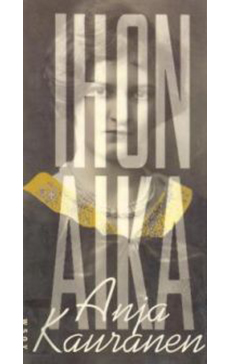 Mother lifts her left leg with both hands from under the hem of the kitchen tablecloth. Her two daughters are stupefied with horror and disgust: on her leg is a huge, purulent wound, as though someone had thrown a stone at her. They try to reason with her, but she refuses to go to the hospital.

Three years later, they sit at her deathbed in the nursing home, drawing her peaceful face in their sketchpads. The younger daughter cannot stop crying; she presses tissues under her eyes, where they stick from the damp of constant tears. The past few years have been a time filled with skin and flesh, more so than any passage of love in her life. She has taken care of her fading mother, watching the determined and sometimes whimsical work of death on her.

She loses her mother—but gains a sister, for she inherits a secret on a certificate needed for the burial arrangements: the document lists three daughters. Three daughters. How much does she really know about her mother? What happened to the girl her mother gave birth to lifetimes ago? Where is she now?

Skin is a lyrical account of the last years in a life, the slow deterioration of hopes and heartfelt relationships. Snellman tells a true and fictive story of forbidden and blessed love, loss and redemption, shame and delight, and the finite nature of life. An understanding that offers, in the end, an infinite vision.

Shortlisted for the Finlandia Fiction Award

“Skin brings many intense topics to the reader’s attention, but essentially it is a story of a daughter’s growth and self-discovery with both a personal and universal nature, in a novel that will not leave its reader untouched.”  –World Literature Today