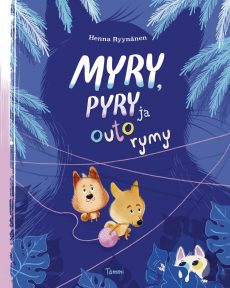 Storm, Gale and a Blast from the Past

Lots of popcorn, a delicious chew bone, and plenty of glogg have all been prepared for an entertaining movie night. The problem is, Santa Claus, Storm and Magpie Mackie can’t agree on what to watch!

As they enter a heated debate we hear three stories, in which we get to know Storm’s siblings; learn about Storm’s first few days with Santa; and hear Magpie Mackie’s cheesiest secret.

Reminiscent of traditional storytelling, Storm, Gale and a Blast from the Past invites you to listen to three stories containing plenty of excitement, laughter and, above all, friendship.

This book is the second in a series about a Finnish spitz called Storm.

Storm, Gale and the Blast from the Past is the second part of Henna Ryynänen’s series about Storm, Santa’s four-legged helper. The first title in the series called Storm’s Christmas Adventure was published in 2019, and the third part is due out in 2021.

“Santa’s fluffy helper. This year Santa will arrive on a flying, electrical sleigh! When Santa shoots off into the sky, a parcel falls out of his sleigh, which the little dog Storm decides to find. An adventure through the dark forest begins. But Storm’s adventure isn’t so scary that the book wouldn’t be suitable for younger readers too.” — Kaksplus magazine

“The book’s lively and cheerful illustrations will capture the imaginations of even the youngest readers. Storm makes for great bedtime reading, since it leaves the reader with plenty to think about.” – Vauva.fi

“This book, which has been written and illustrated by Henna Ryynänen, marks the start of a new series: it’s a fun and delightful read. It is illustrated with different sized images, which contribute to the rhythm of the book: it’s pacey and filled with both dangerous and more peaceful situations. Storm’s Christmas Adventure is essentially a traditional children’s Christmas story, but it’s recognisably and authentically a present-day story.” – Prolastenkirjallisuus.fi

“In our family, the most read book this Christmas is Storm’s Christmas Adventure. The secret behind the success of the Christmas adventure written and illustrated by Henna Ryynänen, as well as its novelty, is the fun intricacies of the illustrations.” – Muksujenmaakunta.fi

“The latest addition to the Christmas book list is a real gem, a perfect book in every way. It’s so much more than glitter and snowfall and waiting for Christmas; it’s a fast-paced and exciting adventure, illustrated with pictures that even adults will appreciate.” – Hemulin kirjahylly