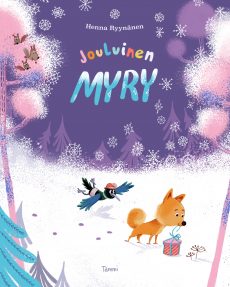 Storm is endlessly loyal to his famous, bearded owner and he’ll do everything in his power to save the day!

Did you know that Father Christmas has a dog called Storm? Storm helps Father Christmas in the same way that all dogs help their owners: by fetching things and keeping an eye out for danger. When the time comes to wave off Father Christmas, Storm runs up the hill to catch one more glimpse of his owner as his sleigh climbs into the sky. That’s when Storm notices a present falls out of the sleigh and land in the woods!

In an attempt to save Christmas, Storm sets off to find the present. Not only does he manage to find it, he also meets the friendly and resourceful Magpie Mackie who wants to help him.

Catching up with the fastest man in the world is no easy task but this dynamic duo are determined to give it a go!

Henna Ryynänen (b. 1979) is an illustrator and graphic designer whose lively illustrations show off her charming sense of humour. After a decade of working in advertising, Henna set up Studio Spotnik, her own company, six years ago. She loves animals, animations and funny stories.

“Santa’s fluffy helper. This year Santa will arrive on a flying, electrical sleigh! When Santa shoots off into the sky, a parcel falls out of his sleigh, which the little dog Storm decides to find. An adventure through the dark forest begins. But Storm’s adventure isn’t so scary that the book wouldn’t be suitable for younger readers too.” — Kaksplus magazine

“The book’s lively and cheerful illustrations will capture the imaginations of even the youngest readers. Storm makes for great bedtime reading, since it leaves the reader with plenty to think about.” – Vauva.fi

“This book, which has been written and illustrated by Henna Ryynänen, marks the start of a new series: it’s a fun and delightful read. It is illustrated with different sized images, which contribute to the rhythm of the book: it’s pacey and filled with both dangerous and more peaceful situations. Storm’s Christmas Adventure is essentially a traditional children’s Christmas story, but it’s recognisably and authentically a present-day story.” – Prolastenkirjallisuus.fi

“In our family, the most read book this Christmas is Storm’s Christmas Adventure. The secret behind the success of the Christmas adventure written and illustrated by Henna Ryynänen, as well as its novelty, is the fun intricacies of the illustrations.” – Muksujenmaakunta.fi

“The latest addition to the Christmas book list is a real gem, a perfect book in every way. It’s so much more than glitter and snowfall and waiting for Christmas; it’s a fast-paced and exciting adventure, illustrated with pictures that even adults will appreciate.” – Hemulin kirjahylly