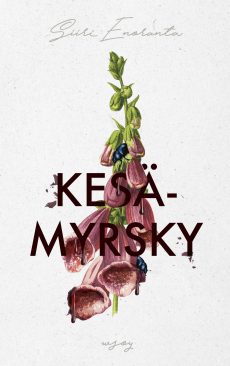 “Enoranta shows that she is among the best modern writers in Finland.” – Aamulehti newspaper

Young Andrew Appleton’s excitement seems to know no bounds when his
family moves to Queensbridge where indigo, the fuel that has revolutionised
travel, is distilled from the city rivers, and aircrafts of all kinds fill the
skyline. But once Andrew sets his eyes on the gorgeous Josh Roy at school,
everything else in the city pales into insignificance.

When Penelope Roy, Josh’s little sister, witnesses a murder, it unravels her
young mind. Her worried parents summon Andrew’s father, a renowned
children’s therapist, to help Penelope gain equilibrium. The murderer is also
still at large, and much rides on Penelope’s ability to recall the fateful night.

Andrew is four days into his summer holidays when his spirits soar. He
learns that he is to accompany his father for a stay at the Roys’ lavish
country house, possibly for the whole summer. At Summersutton, Andrew
delights in getting to know the unpredictable Josh better, and in gaining
access to his world of privilege — a world Andrew doesn’t belong to.

At Summersutton, it emerges that Penelope is not the only one hiding the
truth. The burden of secrets, lies and deceit weighs heavy on some young
minds, and gradually the frivolous, lingering summer of the teenagers
takes on more menacing tones.

The second murder marks the end of their summer. And the emerging
truth unravels them all.

Siiri Enoranta has woven a story that is unputdownable. Her language
breaths, and the unusual world of these young people comes alive. The
atmospheric setting of Enoranta’s novel is a technically more advanced
version of the historical England during the golden years between the
wars.

Sweeping most of the Finnish literary prizes with her previous works –
including the Finlandia C&YA and Topelius Prizes – Siiri Enoranta is masterful
in her penmanship. Summer Storm has her once again reaching a
new high.

Siiri Enoranta (b. 1987) won the  Finlandia Prize for the Best Children’s/YA Title of the Year in 2018 with her spell-binding fantasy novel The Burning Dark (Tuhatkuolevan kirous, WSOY 2018). Summer Storm is her ninth novel, and her fourth Finlandia nominated title – the winner shall be announced 25th November 2020. Enoranta has also won the Topelius, Kuvastaja and Blogistania prizes with her previous works, and has been awarded the City of Tampere Literary Prize thrice. The remarkabe Enoranta also has further nominations for the Runeberg, Topelius, Torchbearer and Kuvastaja Prizes.

’This novel about pain, longing, and rivalry charms the reader with its deft, glorious language. Its world, which combines nostalgia and futurism, allows the reader to contemplate what goes on behind the scenes, deception, and justice. The dark and light combine to form a whole, which resembles a summer storm.’ — Statement of the Finlandia C&YA Prize Jury

“The Summer Storm is an addictive, sensitive, and imaginative novel from Tampere’s Siiri Enoranta. Although the main characters are young, this book is so much more than a YA novel… As you read the book, you can almost smell the sun-kissed cliffs of late summer, flowers that are already wilting, and the damp scent of the forest’s earth. Enoranta has woven an intricate story. Her language is refreshing and brings the unique world of young people alive for the reader. I wouldn’t change anything about The Summer Storm.” — Stina Alapirtti, Aamulehti newspaper

“The intensely atmospheric The Summer Storm and its inevitable tragedy is reminiscent of William Golding’s classic The Lord of the Flies, in which fatal events also unfold on two levels. The orderly world of adults serves as a deteriorating facade, behind which the violent jungle of teenage laws prevails. Psychologically insightful, Enoranta demonstrates that even teenagers are capable of rule by the subtle mechanisms of power. In the end, the reader is left to question, who am I, really? – Kaleva newspaper

“Setting the story in another world makes it more real: Enoranta writes about something we all somehow recognise, even though the time or place do not actually exist. Nor have they ever.” – Warkauden lehti newspaper

“The multidimensionality of The Summer Storm is augmented by Enoranta’s characteristically and skilfully propelled language, which sets a complex pace and develops its own expressions. One of the most interesting authors in Finnish youth literature, Enoranta, who won the Junior Finlandia prize in 2018, writes works that also manage to captivate adult readers.” – Turun Sanomat newspaper

Through her cast of characters faltering between childhood and youth, Enoranta gains delicious access to a kind of innocent cruelty sometimes reminiscent of the siblings in Jean Cocteau’s Les enfants terribles. Enoranta writes beautifully and playfully, with both wisdom and lightness. She creates full worlds with exciting storylines, where the focus is still on the universal, timeless and, for young people, topical themes of love, freedom and self-discovery. In The Summer Storm, the combination of playfulness and seriousness familiar from earlier works has become even brighter. Enoranta is not only one of the finest voices in Finnish youth literature but also an exceptionally interesting author on an international scale.  – Helsingin Sanomat newspaper

With her new novel, Siiri Enoranta shows that she is among the best modern writers in Finland. The Summer Storm is an addictive, sensitive and imaginative novel. The main characters are young, but the book is a broader masterpiece than a novel for young adults. – Aamulehti newspaper

“In the eye of a summer storm, nothing is what it appears to be (…). The Summer Storm is what you get when you cross the young adult books of John Green with those of Philip Pullman. But Enoranta’s own voice comes through strongly in the text, and the work does not resemble any other novel directed at readers of the same age.” – Lyyra Virtanen, Kehrääjä

“[Enoranta is] the most sensitive of Finland’s current YA writers, with a literary style comparable to that of Emmi Itäranta. Enoranta has written both fantasy and realism, but The Summer Storm, with its steampunk and whodunit elements, marks a breakthrough into an entirely new territory.” – Siniset helmet blog

“From its beginning to its final sentence, the book maintains a controlled elegance like a piece of classical music.”– Siniset helmet blog

“The tension of the narrative is sometimes lingering, as if the reader is drugged by the feeling of idleness emanating from the novel and by its thunderously oppressive atmosphere. (…) The book is rightly classified into two categories: for young people and adults.” – Lastenkirjahylly blog