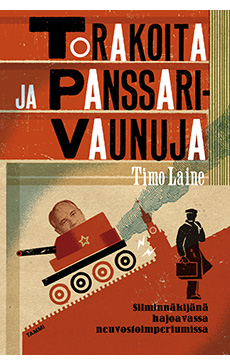 As a young student fascinated by Finland’s enigmatic eastern neighbour, Timo Laine embarks on an exploration of the world of real socialism. He travels through Eastern Europe and the Soviet Union, entering conflict zones and gaining access to areas normally closed off to foreigners. The dramatic events of the August 1991 coup in Estonia he experiences first-hand.

Wherever he goes, Laine takes in everyday life and views national politics through the lens of local sources. He brings a keen eye and insightful mind to his unique access, opening up new perspectives on the breakup of the Soviet imperium, the nature of the Soviet state, communist ideology, cultural differences and ethnic conflicts.

Laine presents the carousel ride of dissolving socialist states as if it were an adventure story: the author’s open-mindedness takes him to places and to the heart of events that were the focus of the most surprising news of the late 1980s and early 1990s. Looking with fresh and unbiased eyes, he observes, gathers information and interprets incidents and developments that shifted the status quo in Europe perhaps more than any other peace-time event.

Irresistibly heartfelt storytelling, profound and considered trains of thought, and openness to change both in himself and his right-edge perspec tives make Tanks and Roaches a reading experience to which few works of non-fiction can compare.

“Laine combines memoir and travelogue with political analysis (…) His observations and insights are sharp and immediate, and there’s plenty of humor as well… (…) Laine offers keenly perceptive stories not only of militia interrogations and all manner of mishaps, but of delightful encounters and experiences. (…) As reportage, Tanks and Roaches demonstrates the breadth and depth it is possible to achieve when investigating phenomena, even with home-made tools – if you only possess the interest, the imagination, and the unflagging spirit. All of which Timo Laine has in spades.” – Helsingin Sanomat newspaper, Finland

“Throughout his observations, Laine humbly acknowledges his smallness and the limitations of his own perspective. But at the same time he has unlocked fresh vantage points, windows to broader contexts. The book does a superb job of bringing history to life. (…) It demands more than a little civilian courage to throw one’s self into the dangers and difficulties that a traveler like Laine must have encountered while venturing across the Soviet Union and Eastern Europe. His reward? Unforgettable experiences. And these he shares with the reading public in a supremely captivating way.” – Kaleva newspaper, Finland

“The best part of the memoir Tanks and Roaches is its narrative style: an everyday realism that sprouts from the grassroots. (…) Laine’s unbiased attitude (although his biases are in no way censored!) and respect for his fellow man shine through the text. He doesn’t shy away from conflicting interpretations or varying viewpoints, and is always ready to modify his opinion if the facts so demand or new information comes to light.” – Kansan Uutiset newspaper, Finland

“Laine has written a rollicking report on his eyewitness trips to the crumbling Soviet imperium.” – Ilkka newspaper, Finland