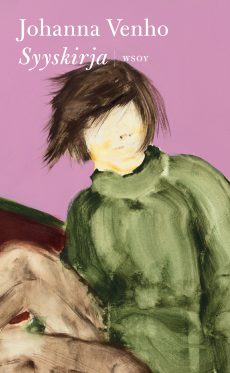 An atmospheric novel about Tove Jansson’s last three days on the island of Klovharu.

Maria, a young eco-activist, writes a letter to Tove Jansson and ends up on the island of Klovharu where the 77-year-old artist lives. Jansson has just published a new collection of short stories and prepares to wave goodbye to the rugged island of almost 30 happy summers. When Maria meets Tove, a world lived for art opens up to her: rebellion, solace, adventure, mischievous laughter. It would have been impossible to be both a good artist and a good wife, Tove says.

The Autumn Book covers several decades, from the 1940s to the 1990s, and, in Venho’s inimitable language, depicts the consequences of the choices we make.

Johanna Venho is an award-winning poet and a novelist. Venho’s poems and children’s books have been published in a number of languages; e.g. in French, German, Italian, Spanish, Swedish and Slovakian. Her first novel of biofiction, The First Lady, is a story about Sylvi Kekkonen, who finds herself and her voice as a writer and hopes that after living one life, there’ll still be time to start another. The First Lady was nominated for the Finlandia Prize in 2019 and published in Estonian in 2021.

I am a big fan of Tove Jansson. THE AUTUMN BOOK tells of Tove’s last days on Klovharu Island. The book aspires to convey melancholy, an atmosphere of departure and farewell. It is a wonderful reflection on artistry. Johanna Venho is also a poet, and one can tell. The language is beautiful and meticulous.
– Krista Kosonen, Me naiset -magazine

Venho renders the individual linguistic registers of her subjects and the prevailing views of the times with breathtaking accuracy.’ – Helsingin Sanomat
‘The Autumn Book is an incredibly clear and identifiable portrayal of letting go and hope; of mothers and daughters, idols and fans, and how the best stories that are woven together come back to the beginning. – ET magazine, Finland

The Autumn Book is a wistfully beautiful work about finding- and giving up one’s own path. It’s an intimate glimpse into the artist’s innermost being and at the same time touches on universally-identifiable themes. – Kirjaluotsi blog, Finland

The Autumn Book is wistful: we all must contemplate giving up, in matters both small and large. Melancholy still yields room for love and hope in the book – just as Tove, when she leaves Klovharu, equips it for those who have yet to come to the island. – Tuijata blog, Finland