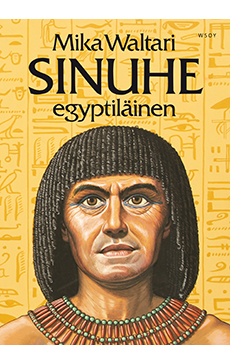 Set in Ancient Egypt during the 18th dynasty and the reign of Pharaoh Akhenaton, The Egyptian became an instant international bestseller upon its publication in 1945. The Egyptian is narrated by Sinuhe, a physician who becomes an advisor to both pharaohs and kings and whose travels take him from Egypt to Syria, Babylon to Mitanni, and Hattusa to Crete at the end of Minoan civilisation.

The novel describes life in 14th century Egypt, painting a timeless story of the brutal reality of human civilisation, whereby the strong oppress the weak and the poor suffer at the expense of the rich. Pharaoh Akhenaton, whose reign was marked by internal conflict, tried to bring monotheistic worship of Aton to Egypt. Waltari paints him as a utopian dreamer and an out-of-touch visionary. Meanwhile Sinuhe is self-centred and arrogant, but ultimately well-meaning. Through Sinuhe’s royal connections, Waltari describes the palace’s sexual liaisons, murders and shifting political alliances in great detail.

Translated into over 40 languages, The Egyptian has been praised by Egyptology scholars for its historical accuracy. The novel’s depiction of the geopolitical situation of the Middle East is thought to be an allegory for World War II and its pessimistic message about the persistence of mankind’s flawed nature has long fascinated readers. It is the most internationally famous and translated Finnish novel in history.

The Egyptian was turned into a film by Michael Curtiz and 20th Century Fox in 1954. The film was nominated for an Academy Award a year later.

Mika Waltari (1908-1979) is the most popular 20th century Finnish writer who is best known for his magnum opus The Egyptian. Over a career that spanned five decades, Waltari published well over 100 works, of which 200 translations have been made. His works include at least 30 novels, 20 plays and 15 novellas, as well as short stories, poems, screenplays and essays. In 1957 he was appointed to the Academy of Finland, having previously won the state literature award five times. Waltari’s works have been translated into over 40 languages.

“A vivid, entertaining panorama of antiquity by a magnificent storyteller.” – The New York Times

“Mr Waltari’s research has obviously been exhaustive and meticulous, and his painstaking honesty has given us a very lively, detailed and convincing picture of the times.” – New York Times

“The Egyptian is an ambitious… historical novel that was a big success in the US in its time (it was the best-selling novel of both 1948 and 1949!).” – The Guardian

“The Egyptian contains all the ingredients of Americans relish: war, women, intrigue, romance, assail, horror, and lavish scenes of violence, indulgence, suffering, and death. Waltari has successfully combined research, imagination, and the cunning of a good taleteller in bringing the generation of Akhnaton to life… Well-paced, richly tinted, and tightly stitched narrative…” – New York Herald Tribune

“An intricate tale that brings ancient Egypt alive… In truth, Mika Waltari’s story leaves readers with the feeling that they have visited a hauntingly familiar world, despite the passage of over three thousand years.” – Lynda S. Robinson, from her foreword

“A powerful novel of impressive erudition… As a picture of ancient Egypt, there has been nothing quite like it.” – Library Journal

“A grand immersion into an epic tale.” – Philadelphia Inquirer

“Sensational… All readers should be warned, however, that its fascination will keep them spellbound for many hours.” – Edward A. Laycock, Boston Globe

“It became a huge international success, selling more copies in America than any other novel in translation before Umberto Eco’s The name of the Rose… Through the eyes of Sinuhe, readers get a highly coloured reconstruction of an era of change and upheaval… and one man’s search for meaning amidst apparent chaos. – 100 Must-read Historical Novels

“Along with Memoirs of Hadrian, this is one of the few books which revives the ancient world with disturbing and divine magic. A thoroughly admirable, powerful and poetic novel.” – P.-J. Franceschini, Le Monde

“… an attractive work which will captivate readers from the beginning to the end.” – Jean Clémentin, Le Canard enchaîné

“How will you now ever forget the sensual body of Nefernefer, the virginal body of Minea of Crete, or the heady body of Merit?” – Jean Bueges, Les Nouvelles littéraires

“An astonishing masterpiece … A perfect remake of an era which captures readers just like a detective story would. A must-read.” – René Tavernier, Le Progrès de Lyon

“The Egyptian is an eventful novel … It can be read with the heart as much as with the desire to learn.” – Claude Fleury, Le Républicain lorrain

“An unparalleled novel, strongly based on historical facts recounting one of the most interesting periods of ancient Egypt. Life in Egypt and the surrounding civilizations is beautifully described by this very special Finnish author.” –