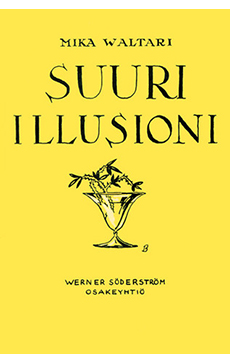 Set in the 1920s, Mika Waltari’s bitingly sharp debut novel is about the aimlessness of urban life and the disillusionment of the lost European youth after World War 1. Following the romantic life of of a young journalist called Hart, The Grand Illusion describes the lives of artists and young people in 20th century Helsinki.

When Hart accompanies a friend to Mrs Spindell’s Salon, his life changes. It is there that he meets the talented writer Hellas and the seductive Carita, who he immediately falls in love with. The Great Illusion tracks the painful and intense love triangle than ensues over a hot summer, interspersed with wise philosophical musings on the role love plays in young people’s lives. It’s as astute on the topic of romantic relationships as it is on male friendships.

Mika Waltari wrote The Grand Illusion as a 19-year-old student living in Paris. The novel was an instant hit in Finland, topping bestseller lists and catapulting Waltari to international fame. The book has drawn comparisons to F. Scott Fitzgerard and Ernest Hemmingway’s works.

Tuija-Maija Niskanen’s 1985 film Grand Illusion was based on this book.

“If we’re talking about cult books, this one’s a cut above the rest: Mika Waltari’s The Grand Illusion (1928), which is considered a good reflection of the new generation of Finnish writers who emerged in the 1920s.” – Luettua elämää blog

“I fell in love with The Grand Illusion right from the start… Waltari skilfully describes feelings, smells, scenes and reflections. The experience of reading this book is very sensory… I loved the shameless passion of the novel… The power of youth, the belief that anything is possible and that things can change is incredibly affecting.” – 1001 kirjaa ja yksi pieni elämä blog