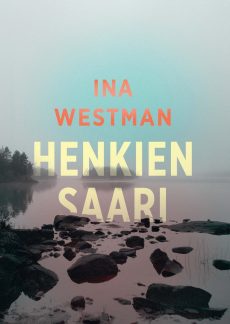 A stirring eco-novel about a relationship on the rocks set against the idyllic backdrop of a Nordic summer.

Emma, Joel, and their young daughter Fanni spend the summer at their island hideaway in the Finnish archipelago. Emma suffers headaches and hallucinations caused by the scar on her head. Struggling to remember how it got there and what happened before the summer, she begins to drift away from Joel as she tells her story, interspursed with dialogue between Fanni and her grandfather and Joel’s telling of his own narrative.

Evincing the atmosphere and intergenerational dialogue of Tove Jansson’s The Summer Book, Ina Westman skilfully navigates Emma and Joel’s relationship, peeling away their layers as their shared future hangs in the balance. Can they find their way back to each other? Emma must learn that in order to save others, she must save herself first. And can she remember what happened to her before her nightmares subsume her entirely?

An often haunting, beautiful and layered narrative of a couple at sea with each other and the uncomfortable truths of climate change, racism and migration. An homage to Tove Jansson’s writing, which tackled similar themes, the novel also draws comparison to Philip Teir’s work, The Summer House, and Elina Hirvonen’s novels.

“What is left to our children? Ina Westman bravely and insightfully tackles climate change, war and racism in her novel… The island is an important milieu… Whilst a house is the classical image of the mind, it now seems that an island is a metaphor for a couple: two people against a harsh and sometimes hostile outside world – completely interdependent. The idyll of romantic love quickly turns into claustrophobia.… However, they manage to extract themselves from the mire, and the ending offers a spark of hope… At her best, Westman inhabits Emma’s disintegrating mind: her writing surging forward in fragments and accelerating downward spirals, the simplicity of her beautiful sentences just right in their assured psychological acuity.” – Helsingin Sanomat newspaper

“The best aspect of the novel is its portrayal of crises and their resolution. Something must be left behind when we go forwards. One must let go, if you are to survive… A succinct and fine novel.” – Turun Sanomat newspaper

“Westman is at her best when she writes about the contradiction between noble aspirations and concrete actions… In addition to the skilful beginning of the novel, it also concludes successfully, with Westman writing magnificently about the movements of Emma’s mind.” – Satakunnan kansa newspaper

“Westman succeeds in perceptively describing the machinations of little Fanni’s mind. In short scenes, Fanni converses with her hippy-ish grandfather about life and the world as incisively as only children can. Reminiscent of Tove Jansson’s writing. ” – Kippari magazine

“Overwhelmingly timely. A family spends the summer at a cottage on a secluded island, but the reality is no summer idyll. Piece by piece, Ina Westman skilfully unravels the past and reasons behind the couple’s alienation from one another. This enchanting novel contemplates global questions about refugees, adoption and climate change. If you enjoyed Elina Hirvonen’s novels or Susanne Bier’s films, read this!” – Me naiset magazine

“Emma, Joel and their young daughter spend the summer in the archipelago. Ina Westman’s Archipelago explores the couple’s life from both points-of-view of how they fell in love, adopted a child, and began to drift apart. Important themes also include racism and climate change. The tone is melancholy yet tender, leaving the reader with a sense of hope.”– Eeva magazine

“An extremely fine portrayal of the anatomy of a relationship.” – Kirjaluotsi blog

“Ina’s turn of expression is beguiling, precise and beautiful. The text flows smoothly, although the content is not such, but deep, enigmatic and speaks to the reader… Archipelago manages to be anchored to our time, whilst at the same time contemplating the eternal basic questions about our humanity, as parents, partners, children, and citizens of the world.” – Kirsin kirjakerho blog

“Saving the world, trying to save it, Westman’s themes are weighty: relationships, family, past events, losses, racism, the pain of the world, blue-green algae, finality, Europe’s borders.” –  Lumiomena blog

“A magical story that continuously peels back the layers and goes ever deeper.” – Suttastiina, Lily.fi

“It’s hard to imagine a timelier novel than Archipelago. It’s is not an easy book; it’s not meant to please or entertain the reader. In some places it is distressing, sad and desolate, but on an individual level, also hopeful. It draws a picture that no one wants to look at, yet we must. Because our lives are like this and will remain so only as long as we forget what lies on the other side of the sea. When you don’t know how to save the world, you can at least listen to those who are trying to, and appreciate those writing about it.” – Helmi Kekkonen, author of The Guests (Vieraat)

“Ina Westman’s Archipelago is a touching novel. She sensitively describes how a woman, Emma, comes back to life.” – Ruhr Nachrichten newspaper

“A compulsive, poetic novel that captures the fragility of life.” – Kleine Zeitung newspaper

“Ina Westman does a great job of weaving various themes and thought from her main characters into her novel.” – hr2 Kultur radio broadcast

“Archipelago by Ina Westman is a family saga full of  twists and turns that stirs something deep in the reader.” – Brigitte magazine