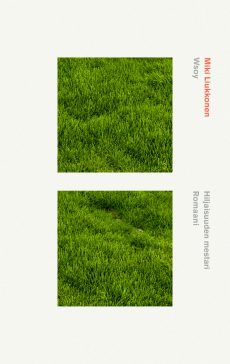 The Master of Silence

A dazzling and genre-defying novel that captures the zeitgeist of our time.

At midday, a twenty-something man is found dead in his office chair. Meanwhile, Herman Leorne is interviewing people for his Youtube channel, discussing the interestingness of things. Elsewhere, a mother with an eating disorder considers ending her life with an overdose of Botox. But how does all this tie-in to the significance of Sinatra’s My Way in karaoke history, stringent Subway™ staff training days, and iced coffee?

Following his meteoric magnum opus, O, Finland’s rockstar literary savant is back with comparable brevity, with an astonishing new work about people, the difficulties of communication, and an interest in things external to their ontological being. In the author’s own words, it is “like a detective novel in a coma,” intriguing without movement or procedure.

In its titular homage to Rimbaud’s reference to death, Liukkonen proves himself a seer of the big questions of the era, with influences of Foster Wallace and Mishima in evidence in his brilliant, new novel.

Miki Liukkonen (b. 1989) made his literary breakthrough with the astonishingly accomplished novel O, an encyclopaedic narrative of ordinary people and extraordinary events, becoming the most talked about literary tour de force in recent years. The novel was shortlisted for the 2017 Finlandia Prize for Fiction, and for the 2018 Runeberg Prize in.

“[The Master of Silence] doesn’t feel like a secondary work, despite following Liukkonen’s mammoth novel O, which came in at almost 900 pages and was nominated for the Finlandia Prize. Its more concentrated form shows off Liukkonen’s humour as well as his ability to write quick, and absurd, cuts between chapters. The Master of Silence is a novel in its own right; one which is bought together by incorporating philosophy, a strong rhetoric, and a unique worldview. At times defiant, The Master of Silence gives two fingers to a world that is too sanitised and politically correct: if you happen to run into reality, tell it that there’s no place for it here.” – Jukka Petäjä, Helsingin Sanomat newspaper

“Enjoyable in the round.” – Etelä Suomen Sanomat newspaper

“Liukkonen is Finland’s David Foster Wallace — The Master of Silence akin to a deliciously-filled baguette… No one in Finland writes like Liukkonen… this is the most interesting, astounding, and intelligent novel of the spring.” – Aamulehti newspaper

“Liukkonen’s work captures the essence of our time, the weight of which many experience yet rarely understand.” – Keskisuomalainen newspaper

“Liukkonen is an unrivaled linguistic virtuoso who writes effortlessly flowing text full of fresh tropes – from where, who knows.” – Kaleva newspaper

“At the beginning of Miki Liukkonen’s third novel, the anonymous protagonist compares words to a weak rope bridge that people cross to reach one another, a gaping ravine beneath them. The Master of Silence is mostly made up of conversations people have with themselves and each other. Intense eruptions of speech are only seemingly arbitrary; the sentences are clear, and thoughts brim with energy. One of the book’s themes is bulimia, which comes across in its structure: the characters are greedy in their thoughts and ideas, which they purge in the form of words. Thomas Pynchon and David Foster Wallace are recognisably Liukkonen’s literary role models.” – Suomen Kuvalehti magazine