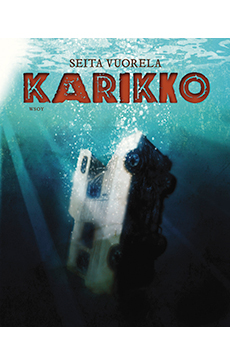 Seita Vuorela’s The Reef is easy to imagine as a powerful movie. It raises to prominence a milieu that has been strangely disregarded in classic works of literature: the campground. The 1970s campground experience, so familiar to many, is developed, through a blending of the techniques of realism and dreams, into a world of fantasy in the magical realist vein. This setting forms a strange liminal space leading to a shoreless sea, where it is possible to roam endlessly at the frontier between dreams and reality. It is a separate world, in which its inhabitants have been caught.

The campground thus offers an utterly local yet universal stage for the book’s events, through which two teenage brothers wander after their friend’s accidental death. The Reef is also a book for men who have once been boys and to mothers who have feared for their child. It is also for girls who have wanted to save a boy, or many of them, and for those boys who rather played pirates than waved their goodbyes to the crowd gathered at the shoreline.

The Reef is a superb depiction of accepting death and letting go. It is also a multifaceted, timeless story whose mysticism comes naturally. Seita Vuorela masterfully leads the reader to the end of the World and we return changed. We won’t be able to let the book go until we find out what is beyond that final cliff. Jani Ikonen’s illustrations complement Vuorela’s dreamlike world.

”The Reef is exceptionally tight storytelling. All of its contexts circle through the same metaphoric world, without this feeling forced or superficial.” – Torchbearer Prize Jury, 2013

”The Reef brings together the three fundamental criteria for a work which will succeed in translation: a unique, recognisable and refined idiom; a unique, interesting, and universal theme, and a strong story.” – Sofi Oksanen, Chairperson of the Torchbearer Prize Jury, 2013

”Seita Vuorela structures her plot as a mosaic with flashbacks, foreshadowing and random bits. This technique is quite challenging for the reader but ultimately rewarding.” – Books from Finland

”The Reef is a self-assured work, aware of its odd charm. It is intended for readers who prefer not to have pre-digested material fed to them.” – Books from Finland

”Kalevala meets The Brothers Lionheart and The Lord of the Rings.” – Aamulehti

”Even though The Reef deals with death, it is definitely a book for the living.” – Aamulehti

”In her ambitious artistic endeavours, Vuorela takes advantage of the international boom in fantasy in a way that renews the entire genre. (…) The Reef reflects on the relationship between the individual and society in the same way as William Golding’s Lord of the Flies, Aleksander Melli’s The Children’s Government or Suzanne Collins’ The Hunger Games. From the perspective of the storyline, Vuorela’s way of depicting adults and especially the parents of the children is well justified. Adults appear as near-translucent, powerless figures who no longer have any real authority over or contact with their children. Vuorela also makes use of old myths, for instance Greek legends and, through a figure known as the Maid of Death, ancient Finnish beliefs, as well as classic fairy tales, particularly H. C. Andersen’s “The Wild Swans”. – Statement of the Jury for Nordic Council Literature Prize for Children and Young Adults, 2012

“Distinctive, sophisticated and powerful”.  “The Reef is an unusually ambitious novel… The story is a moving and hypnotic dream trip that revolves about grief, loss and separation.” – Damián Arguimbau / Weekendavisen