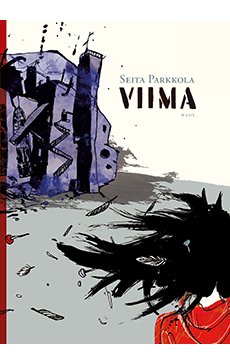 The School of Possibilities

”Being twelve years old is like being in an eight-car pile-up. It’s like getting stuck upside down on a rollercoaster…”

The School of Possibilities is a captivating novel about an ordinary boy who takes extraordinary measures to bring down a tyrannical institution. Storm’s stepmother decides he needs some discipline, and she sends him to the School of Possibilities, telling him it is his last chance to behave. The school is oppressive and stifling, and Storm can’t understand why all the other children are doing exactly as they are told.

Storm meets India,the rebel  outsider and fellow skateboarder, and together they begin to unravel the mysteries of the school: Thee strange secret in the basement that has all the children under its spell gets gradually discovered. Skilfully combining the tradition of magic realism with inventive urban fantasy, Parkkola has created a sparkling and original novel that will keep readers hooked to the very last page.

Published to huge critical acclaim in Finland, The School of Possibilities was Seita Parkkola’s (1971-2015) first full length novel. After The School of Possibilities she was called a rising star on the Scandinavian literary scene. Seita Parkkola (later Seita Vuorela) had studied literature, cultural studies and philosophy; and she was working as a creative writing teacher for young adults. She was involved in many web-based projects for creative writing and literature.

”This film was x-rated and I was acting in it even though I wouldn’t be allowed to watch it on tv.” 12-year-old Storm is right. The novel that tells his story is grim. His parents leave him, his school is a systematic prison camp and his schoolmates are sadists. But Seita Parkkola’s short sentences move with lightness and the reader may stay alive. The text can be read as a dim fantasy or as a symbolistic multi-layered tale filled with ambiguities. The novel’s theme is the mutual dependent relationship of a pre-adolescent to his parents, to school, and to other children, as well as the fury to get away, to take off. When Storm lands in the penitentiary school “The School of Possiblities” they promise him a future. A girl named India with tangled hair whispers to Storm the promise of freedom. Freedom means throwing away the future and living on the streets. Storm and India begin their rebellion with words and with pictures.” – Helsingin Sanomat daily newspaper

“… an extremely interesting, nightmare-like description, partially utilizing fantastical expression, of the operation models of a strange boarding school and the fascistic pedagogical methods of the teaching staff. The School of Possibilities is claustrophobic in Kafka-like manner.” Salon seudun Sanomat daily

“The School of Possibilities is a strong manifest defending the freedom of children against the despotism of parents.” Etelä-Suomen Sanomat daily

“It is very pleasant that the novel is illustrated even though its target group does no longer read illustrated stories. Jani Ikonen’s illustrations leap with courage from a style to another. The School of Possilibities, or, Storm is a total work of art in a modern manner. (…) Parkkola’s intellectual, satiric and poetic writing keeps the narration fresh. “One can excecute a human, but one can also execute other things, like hope and freedom and all free thoughts”. Kouvolan Sanomat daily

“Seita Parkkola builds an ambitious, personal work of art and attaches it to tradition… This novel is not a cliché, not even in its two central ethical attitudes: that families should stick together and that difference is power.” –Parnasso Literary magazine

“The School of Possibilities is smart, scary, and stylish, with a plot that emphasizes individuality and personal responsibility without getting obnoxiously preachy about it. In a field dominated by Harry Potter rip-offs and PG-rated takes on Twilight, that’s a rare and enjoyable combination.” – Wordcandy Literary blog

“The School of Possibilities is a great crossover between middle-grade and the younger spectrum of YA. Since it’s funny, has great world building, as well as thoroughly developed and likable characters, and a minuscule amount of romance, while still containing innocence that’s usually not associated with older YA. (…) this was one story that proved to be un-put-a-down-able. ” – Laureen’s Crammed Bookshelf Literary blog

“The School of Possibilities must be the exact opposite of all those free-thinking, high-performing Finnish schools.” – Unadulterated Literary blog

“This book reminded me of Coraline by Neil Gaiman because it has the strange, curious, dark and horror movie feel to it.” – Books and Makeup Literary blog

“It has a Roald Dahl-ish quality that  is both startling and appealing:  a kind of parable/horror /adventure story, complete with very eerie illustrations. by Jani Ikonen. The writing is clean and sparse, yet  quite poetic and filled with dialogue that is true to the characters the author has created and has a kind of sophistication and cleverness that kids and adults will both appreciate.” – Lit for Kids Literary blog

“The school subtly turns normal children into “perfect” children, the children their parents and teachers want. Like a Stepford Wives for kids, weird and adventurous.” – Something Wicked Comes of Age Literary blog