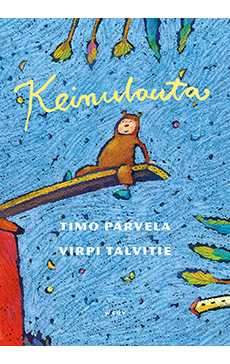 The other end of the seesaw is empty. On the other end, Pi is waiting for a friend to seesaw with, in vain. Pi is scribbling in his notebook: ‘You can’t seesaw when there’s no one on the other end’. When a huge tree crashes on the seesaw, the little bear Pi is propelled into space. Pi grabs the crescent of moon and is told that Moon and Sun always seesaw together.

On his journey, Pi meets all kinds of creatures and finds out that in life, too, you go up and down.

Every child has a lonely bear inside, so it’s easy to relate to Pi’s story. With a delicate touch, Timo Parvela brings up familiar feelings. The lovely illustrations of Virpi Talvitie support the story and feed the reader’s imagination.

The Seesaw was awarded the national Finlandia Junior Prize for the best children’s title in Finland in 2006.

‘Timo Parvela’s The Seesaw reminds me of The Little Prince. Heartwarming!’ –  Buchkultur (Germany), 06/2011

‘A beautiful and deeply touching book, for children and adults alike, about which you can talk for a long time.’ – Bato schreibt.de (Germany), 01/2012

‘The Seesaw has the makings of a children’s classic.’ – Statement of the Finlandia Junior Prize Jury (Finland) 11/2006

‘The Seewaw is a very special book, in several ways. The story takes some fantastic turns and feeds your imagination and it is written in a philosophical, Moomin-like way.’ – Barnboksrat.se (Sweden) 12/2010