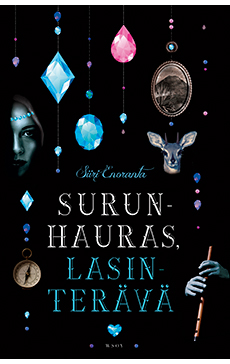 The Dawn Palace is abuzz with power games, and a cruel young child is cooking up a batch of poison. Princess Sadeia has an obsession that threatens the entire realm.

Sadeia of the Dawn Queendom is just sixteen, but she has been the sole ruler of her land for years. She has to have control of all the reins, and everyone must yield to her will.

On the other side of the ocean live the Sorrow-deer people. A sorrow-deer tells them how much sorrow each one of them will bear during their lifetime. A little boy called Uli gets a bigger gift than anyone else has ever received. He writes a message that is carried a little too far.

Siiri Enoranta’s novel is a tapestry of narrative voices. Everyone wants something, and everyone loves someone. The narrative is like a prism in which dreams, power relations and interdependencies are refracted and broken up.

Siiri Enoranta (b. 1987) has been nominated for a number of prestigious Finnish literary prizes, e.g. the Runeberg, Finlandia Junior, Topelius and Kuvastaja awards in Finland. She is a three-time winner of the City of Tampere Literary Prize. Dawn Crossing is her sixth novel.

“Siiri Enoranta’s Dawn Crossing is impressive literature. The magnificent and multi-faceted novel takes the reader to Dawn Palace and the islands where the Sorrow-deer people live. The thoughtfully considered themes that the novel carries are power, love and humanity. The world, the gallery of protagonists and the story created by Enoranta form a dazzling kaleidoscope. The reader does not get lost, for the writer leads one confidently through the novel. Written in beautiful language, the book weaves various parts of the story and the many voices of the narrators into one unified image that lives at the front of the eyes. This atmospheric and stylish work shows that Enoranta is among the torchbearers of Finnish literature.”– Statement of the Topelius Prize Jury

“Dawn Crossing portrays an entire world, complete with distinct world-views and cultures. Its two continents’ populations exist without knowledge of each other, since the ties between the two were broken long ago. Crossing the sea that separates them is not only an exciting adventure but also a journey across horizons that restrict one’s spirit and one’s way of thinking. Enoranta conducts the story from the perspective of several narrators, weaving an enigmatic tapestry of events in which nothing is predictable.” – Statement of the Finlandia Junior Prize Jury

“Enoranta demonstrates that she has a brilliant command of the development of epic, sweeping, original, storytelling arcs.” – Turun Sanomat newspaper

“[…] my mind is filled with this work of art. Siiri Enoranta’s Dawn Crossing is for me right now the most significant book of this autumn.” – Literary blog Kirjakko ruispellossa

“I can’t praise Enoranta’s writing style enough, it’s an earth-shatteringly great read. […] Although this book is intended for a youth readership, I think every adult should read this book.” – Dysphoria blog

“Dawn Crossing is a multi-dimensional young adult novel. Between its covers are major themes, but it isn’t crushed or derailed by them and instead draws on them for adventure, suspense, and romance too. Enoranta exploits opposites, which, as they collide, are seen in a new light. Having several narrators strengthens the story arc, making it deeper and clearer.” – Suketus blog