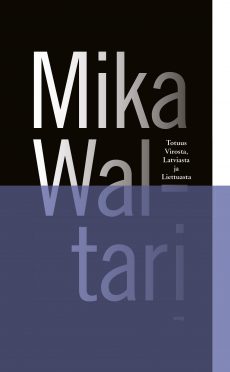 The Truth About Estonia, Latvia and Lithuania

Originally published in Sweden by Förlaget Baltikum during the Continuation War and under the pseudonym “Nauticus”, The Truth About Estonia, Latvia and Lithuania is a historically fascinating work.

Aside from his writing career, Mika Waltari worked for Finland’s State information office during World War II. During the war he wrote political propaganda, for which he was given access to classified material by the state’s police and military intelligence. The theme of the propaganda centred on Russian espionage in Finland and the occupation of the Baltic states. During the Interim Peace he wrote The Truth about Estonia, Latvia and Lithuania, under the pseudonym ‘Nauticus’.

The work was prohibited after the war and later became one of the most sought-after books in the antiquarian bookstores. A reprint was issued for the centenary of Mika Waltari’s birth in 2009 by WSOY.