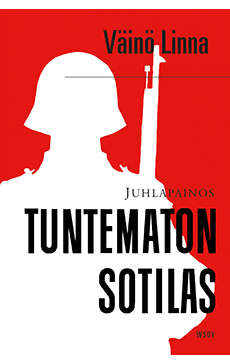 The Finnish masterpiece of men at war

One of Finland’s best-loved literary masterpieces, Väinö Linna’s The Unknown Soldier follows a ramshackle troop of machine-gunners in the Second World War, in mobilization in 1941 through Finland’s defeat to The Soviet Union, three years later. As these very different men, from across the country, and all walks of life, argue, joke, swear, cadge a loaf of bread of a cigarette, and combat both boredom and horror in the swamps and pine forests, the war will make or break them. They are the unknown soldiers.

Weaving together the wartime songs, propaganda and dialogue that characterized life on the front, Linna’s novel distilled the historical moment into a searing fiction that was instantly recognized as truer than history. Upon its publication in 1954, the novel achieved, in the words of its dumbstruck publisher, “greater success than any book in our country, ever“. Gritty and unromantic in its depiction of battle, told with a documentary-like realism, The Unknown Soldier also honours the dogged determination of a country, and the bonds of brotherhood forged between men at war, as they fight for their lives.

A new English translation of the novel was  published by Penguin Classics in May 2015, entitled Unknown Soldiers, translated by Liesl Yamaguchi. Unknown Soldiers is the only Finnish novel published in this prestigious series.

Martti Mykkänen (1926-2008), who designer the iconic cover, is a renowned Finnish graphic designer, who has created over 450 book covers and posters, marking the peak of Finnish postwar graphic art.

The Unknown Soldier has been translated to English, French, German, Italian, Spanish, Swedish, Norwegian, Danish, Icelandic, Russian, Hebrew, Czech, Hungarian, Dutch, Greek, Croatian, Chinese, Latvian, Estonian, and Polish. Many of the translations were made in the 1950’s and in the last decades of the 20th century. A new Russian translation of this this great masterpiece was published in December 2017 to honour the Centenary of Finland’s Independence.

“It is easy to see why The Unknown Soldier has become a best-seller… The story of Finland’s second war with the Soviet Union is as gristy as The Naked and as panoramic as Stalingrad. It is the little man’s view of war, with all the anxiety, discomfort, and naked terror it implies. But it is also a cumulative picture, a cmmentary on war in general, the drives that create it, and the frustrations that follow from it. Altough the setting is Finland, the situation is familiar to all those who were embroiled on one side or another of World War II. Väinö Linna has produced a hard-hitting documentary. He shows a dimension of war that particularly the Americans should study and understand.” – Boston Herald (Ace Books edition, 1957)

“Finland’s successful resistance to Russian encroachment during the Second World War retains an element of the miraculous. The Unknown Soldier describes how the miracle was performed, the men who performed it and the price they paid. Väinö Linna knows the men he is writing about and he who himself fought in the war takes as his central characters a platoon of machine-gunners. This progress of his novel which takes them from early triumphs to final defeat demonstrates the kind of men they were. For this book is about individuals and is concerned to analyse within the intensely dramatic and moving framework of its story how men’s characters respond to the manifold stresses of war. Linna is interested in men rather than Man, and the reader sees how one is strengthended, another twisted, and others die. This book which has been received with understandable enthusiasm in its own country tells a story to which the people all over thw world can respond – a story of war from the point of view of the rank-and-file soldier rather in the manner of All Quiet on the Western Front.” – Presentation of the English edition (Collins, London, 1957)

“One of the best war novels ever written.” – The Guardian

“One of the greatest war novels of our generation.” – Saint Louis Post-Dispatch

“The novel looks mainly from below at the world which it describes. The “frog’s-eye view” criticised by reviewers [of the time] is the work’s central artistic choice. It enables the novelist to deal with otherwise hidden structures in Finnish society and to present in a dramatic fashion the cultural activeness and need for self-determination of the lower cultural strata and the common man’s view of life so typical of the novel.” – Professor Jyrki Nummi in National Biography of Finland

The Unknown Soldier is a novel consisting of dramatic and dramatically effective scenes, of series of images which have been skilfully cut and edited together. (…) the film adaptations, especially the one that Laine’s directed together with the enormous selling figures of the novel support the canonization of The Unknown as a monumental cornerstone of Finnish identity and national history.” – Author Juha Seppälä in his foreword to the 56th printing.

“Unknown Soldiers still has the power to shock. Linna’s men fight a dirty, dog-eat-dog war. By focusing on hardship rather than heroics, and eschewing any trace of gallows humour or lyricism, Linna’s gutsy, visceral portrayal of war owes more to Mailer than, say, Waugh or Heller.” – The Herald Scotland, April 2015

“Unknown Soldiers shows the reader the horror, chaos, and ultimate futility of war. As we watch beloved characters die without cause, and the survivors become increasingly traumatized, we realize intimately the idiocy of fighting for a small strip of land. We also see heroism as nothing more than an instinct to survive: how utterly reprehensible it is to force human beings to confront that instinct. Unknown Soldiers destroys any heroic conception of war we might have, and replaces it with Koskela’s sober realization: “War is no place for a human being.” – Asymptote Journal’s Daniel Goulden reviewing a book “so good it hurts to read”, May 2015.

“The greatest literary success in the north in modern times.” – Arbeiderbladet