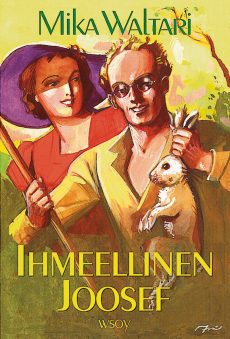 It’s spring. University student Karin Lauraeus walks across Helsinki’s Esplanade with her skirt fluttering in the wind. She’s furious at men and their deceitfulness. The major, who she previously thought of as a shoulder to cry on, has recently revealed himself to be after her family money.

Karin and her friends are sitting in a trendy restaurant gossiping about the holidays. First Karin notices his glasses. Then his shabby raincoat, worn shoes, and pipe. That man doesn’t seem to belong here…

The Wonderful Joosef is a wild and spirited book which is filled with Helsinki charm and nostalgia for times gone by. Its characters spend time at Fazer and Grand, Kappeli and Kaivohuone, even spending the hottest day of the year on the beach… much to the amazement of the locals!