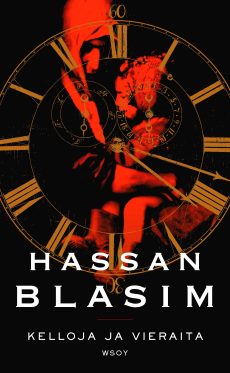 The Clock and the Guests

Fact and fiction blend together in two biting narratives about hidden manuscripts, persecution, and a dinner party that goes wrong by the author The Guardian described as “perhaps the greatest writer of Arab fiction alive.”

ISIS have taken over the city of Mosul in northern Iraq, converting the legendary Clock Church into a command headquarters. Home to countless individuals who have been subject to the violence of ISIS, the church’s crypt contains a pile of ancient and valuable manuscripts that Catholic cook Abu Qatada is desperate to steal and return to its rightful owners.

When Abu Qatada, who is posing as a Muslim to gain access to the crypt, enlists the help of his apprentice Elias, a Yezidi orphan from Syria, the pair embark upon a journey even more arduous than that of the clock itself. As electrifying as it is tragic, Elias in ISISland is Blasim at his best.

In The Law of Sololand, Refugee S hears that locals haven’t responded well to a new refugee camp in an isolated town in Nordak. Having himself fled the torture of a religious militia and settled in Scandinavia, Refugee S wants to help foster relations between the people of Sololand and their guests.

But when Refugee S signs up to facilitate Dinner Guests, a volunteer-run integration initiative, the ugly side of the North is revealed. Blasim expertly captures the devastating dislocation of exile in this new novel.

Blasim’s words don’t sit neat and quiet on the page, like most ‘well-behaved’ literature; they explode, they frighten, they offend, they make you laugh at things you shouldn’t laugh at and they keep you awake at night. Blasim’s work, like his own life, is a reminder that war rages at our city gates, while we sleep on, convinced that all is fine and dandy with the world. – Ra Page, Managing Editor, Comma Press

Blasim shows himself, once again, to be a storyteller beyond compare… — Helsingin Sanomat newspaper

The Clock and the Guests is at least as important as Blasim’s previous novel Allah99 (WSOY 2019), which Aamulehti newspaper called the most important novel of the century. Not as a defence speech by asylum seekers but as a bright star of literature, a profoundly touching narrative that increases understanding between people and opens up a new space in the reader’s consciousness. A similar achievement in Finnish literature does not come to mind. — Parnasso literary magazine