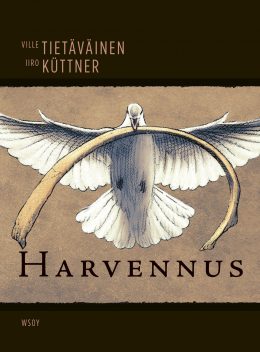 This ingenious and thrilling story spans through the ages to deliver its verdict of our species’ inability to evolve, even if it were to fix the course of our own demise.

Year 2,800 BC. God commands Noah to build a floating ark where all animals are to be given refuge from the Great Flood which God shall unleash to punish the decadent mankind. Noah’s sets to work but surprising problems arise to stall his progress.

Year 450 BC. Finally the history of the Jewish people has been preserved within one single scroll, proclaiming the one truth, helping to unite the nation. At the temple in Jerusalem the old, discarded scrolls filled with our history are burning on the pyre—but one is saved from the flames…

Year 2021. German researcher Elke Greiss embarks on a high-altitude quest on Mount Ararat. Her search unearths an ancient scroll— likely the find of the millennia—containing the story of Noah in greater detail than ever before. Elke’s university has exciting plans for the scroll— but the result is unexpected disaster of biblical proportions.

”Evolution of mankind is broken; we do not adapt to the environment, but force and manipulate the environment to adapt to us and our goals at the time. Thinning comments on the accelerating extinction of different species, difficult choices, and rising sea levels— same elements that Noah’s story contains which is why it fitted so well to provide a background story.  But in terms of content, the work does not deal with church history, nor with religion, nor with man’s relationship with God – but with man’s relationship with all living things.” – Iiro Küttner

‘Truth has been thinned for thousands of years…In today’s world, old books and their truths do not burn on pyres but in the cold glow of the economy. In THINNING, Tietäväinen and Küttner show how our civilization is endangered repeatedly over the millennia. The tale is told in this spectacular graphic novel where satirical humor bubbles right beneath the surface.’ – HELSINGIN SANOMAT, Harri Römpötti