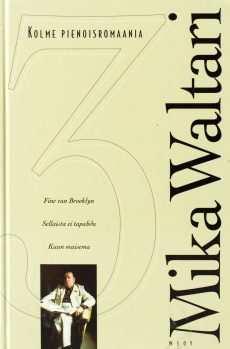 This Kind of Thing Never Happens

This Kind of Thing Never Happens is a poetic, mysterious, sensational 63-page novella from Finland’s beloved Mika Waltari. Originally rejected by his publisher WSOY for being “too morbid”, the novella tells the story of an unnamed Finnish businessman who is leaving for a business trip to Athens on the eve of World War II. When he ignores advice from local authorities and boards the plane, he is surprised to find just one other passenger: a former singer who is on her way to Egypt.

The plane crashes, leaving the man and woman stranded in the Balkans, in a country that is in the midst of a civil war. They pair are met with extreme violence and absurdity and ultimately leave for the city, opting to join a circus. The decisions the pair make thereafter are open to interpretation. Are they sailing down the river in search of a better life? Or are they en route to hell? Waltari’s writing is vague and mysterious, leaving readers to decide the fates of his characters for themselves.

“A short, previously unpublished novel, which is almost prophetic. The text is striking in its modernity. It’s reminiscent of Duras, the nouveau roman. It includes anonymous characters, unnamed countries, very little dialogue and enigmatic ‘white writing’, leaving the reader space to fall back on their own imagination. There is no doubt that the work of Mika Waltari… can still surprise us.” – Livres Hebdo, France

“In this story, which was written in 1939, a man and a woman board a plane heading to southern Europe. The plane crashes and the two survivors start wandering around a dangerous country in the midst of a war… they encounter many strange people and their journey ends on a river barge with a touring troupe. Where are they? Are they alive? Is this an underworld above hell? Mika Waltari doesn’t answer his readers’ questions, making his novella a premonition of the horrors yet to come.” – Olé, France

“It was high time to give the French public this beautiful book… It occupies a special place in Waltari’s canon, revealing a previously unexplored side of the author’s world.” – Actes sud, France

“This little-known book by Mika Waltari is a literary gem… Throughout the novella, the vague and universal overshadow the concrete, creating an imminent feeling of danger.” – Virginie Neufville, Fragments de lecture Literary blog, France

“Those of us who know what happened to gypsies, dwarves and other entertainers between Central Europe and the Balkans after 1939 assume they were living on borrowed time, doomed to annihilation. Our retrospective knowledge brings depths to this strange and beautiful story.” – Pierre Ahnne, Salon, France

“This previously unpublished literary gem, which was written in 1939 by the author of the The Egyptian, follows two individuals who are in a rush to escape the unknown. The travellers discover, and then reveal, themselves in a mysterious world at the edge of chaos, which is far from everything, including themselves. Mystery, poetry and allegory shine a light on Europe before World War II.” – Figaroscope / Le Figaro, France

“The book’s fascinating narration is engulfed by a poetic, mysterious atmosphere that shines light on the uncertainty that dominated Europe at the dawn of World War II.” – El corso, Spain

“… this adventure is not beautiful: it is full of blood, violence, horror and uncertainty, it is filled with… ugliness and landscapes described in expressionist terms… with characters that seem to come from the Caprichos de Goya or El Bosco’s oneiric paintings. This short novel is almost a poem about pain, mourning, searching for the meaning of a wasted life and finding happiness in chaos. It is an existential fable that avoids explanation, leaving them in the hands of the reader’s imagination.” – Alexis Ravelo, Author Littéraire, Spain