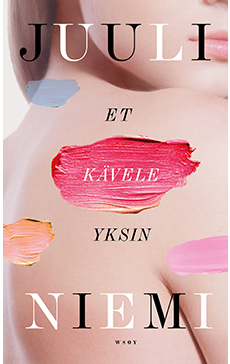 Egzon has never visited a foreign country. He hasn’t even been to the place where people say he comes from.

Ada is 15 and only just beginning to figure out who she is when she falls in love for the first time. Up until now, her life has revolved around her best friend, the bohemian home she shares with her artist mum, and being good at school. But now there is Egzon.

Egzon’s family is from Kosovo. Egzon is called an immigrant, even though he was born right here. He is restless and is haunted by the unspoken secrets at home. He puts his thoughts into words through graffiti.

One morning, somebody has painted a girl and the word “Run!” on the side of the headteacher’s car. Ada could still run away, but she doesn’t want to. Ada and Egzon, whose backgrounds couldn’t be more different, fall in love. Their first love means everything and changes everything, but it is also in danger of falling apart, and of breaking them in the process.

Juuli Niemi (b. 1981) has written a smart, realistic portrait of young people searching for their identity in this sensitive, moving YA novel.

“Thanks to its two narrators, You Won’t Walk Alone is a book for both girls and boys. Like the best children’s and YA literature, it also offers a passage for the adults to enter the painful phase of young people growing up. (…) Juuli Niemi’s language is beautiful, and sometimes the narrator’s thoughts fly high up to the sky in order to examine the lives of the protagonists. The book is cinematic, its scents and flavours charm the reader. (…) [The protagonist] Ada would want to be in the light. Young adults must be in the light and they must be heard. We see young people on the street, in public transport, in advertisements and in the news, but it requires courage to face their minds. It takes courage to accept diversity. Juuli Niemi brings these young people to the center, and makes them important in a compassionate way.” – Actress and Singer Vuokko Hovatta, who chose the 2016 winner of the Finlandia Award for the Best Children’s and YA Book

“Juuli Niemi has written a wonderful book. You Won’t Walk Alone is simultaneously a poetic and gentle description of first love and a rough story about families and the relationships between parents and child, and a realistic story of young people nearing the end of school. Niemi has perfectly grasped the feeling of things happening for the first time – and even the second time. (…) the story is interesting, multi-dimensional and delicately told. Both first love and first time are so wonderfully terrible. Niemi is not gentle with her characters but in the end she clears the road of debris for ”new things, and people, to come along.” – Kirjavinkit

2016: Finlandia Award for the best Children’s and YA book