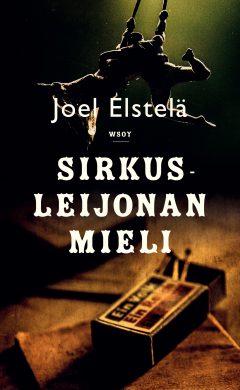 A magnificent, magical-realist novel of a circus touring through the Third Reich, shortlisted for the Finlandia Prize 2021.

Egon Heuchler has spent his entire life running the Zircco Fantastico, a circus whose eccentric performers – the Cat Woman, the Fattest Man in the World, the Bearded Lady, the Siamese Twins, the Italian Tenor, the Greek Daredevil and even the old circus lion – have become like family to him.

Berlin, spring 1940. Zircco Fantastico is taken over by the Nazis and its new director, Steinwampe, turns out to be a ruthless psychopath. The old ringmaster has to accept that his circus has been adapted to suit the new National-Socialist rule, reducing the diversity of the performers into a mere travelling freak show. Egon observes injustices and horrors but watches helplessly as his performers are ridiculed and terrorized. He turns to drinking, falling asleep at times in the old lion’s cage.

Heinrich Himmler comes to watch the last show in Passau. Things turn even more macabre with a disturbing new act: Steinwampe presents a rifle to the Reichs-führer so that he may shoot the old circus lion, Egon’s companion and alter ego.

With the lion dead, nothing goes as the Nazis had planned while Steinwampe is eliminated in an act of sabotage. Instead of being shoved onto a cattle train bound for Auschwitz, the circus troupe vanishes into thin air. Exhausted, Egon finds the magic matchbox that the illusionist had used in his disappearing acts. He reminisces about his days of grandeur while pondering to himself, ‘Do old circus lions dream of hunting?’

Likened to Günter Grass’ The Tin Drum, ZIRCCO FANTASTICO is a visually precise, cinematic account of the horrors a circus troupe endures in the Third Reich, narrated by a masterful storyteller. It doesn’t recount the atrocities of war, but the fear and humiliation of individual people and the consequences of their debasement. The grotesque and vulgar intermingle with the nostalgia of a bygone world. The effortless grandeur of Elstelä’s writing makes this dark and at times, comic tale an unforgettable masterpiece.

2021, nominated for the Finlandia Prize

Reading this novel is a strong bodily experience. The language used to describe emotions is apt, precise. The narrative is compelling, the phrases are flowing, the circus world is sensuous and the circus wagon metaphor is potent. Questions of responsibility, self-deceit and turning a blind eye are dealt with in a way that is touching and relatable. – Statement of the Finlandia Prize Jury

Zircco Fantastico is that mixes history with a touch of magical realism set in 1940s Nazi Germany. The circus master runs a theatrical miniature world, which is disrupted by external realities as the Nazis attempt to dictate the direction and purpose of the touring circus with a show that makes no reference to the war, and Himmler threatens the old lion with a rifle. Instead of a history lesson, the novel offers up a mild farce and romance between the freaks reminiscent of Günter Grass’ The Tin Drum. – Aamulehti newspaper

Elstelä’s language is so sensuous and evocative that it genuinely transports you to Germany in the 1940s. (…) All of the details, from the objects in the circus wagons to the smoke-filled atmosphere of a Berlin speakeasy, are carefully refined. Perhaps due to Elstelä’s background as a playwright, the events of the novel completely come to life in the reader’s mind. (…) Zircco Fantastico is one of those novels that will stay with you forever. – Keskipohjanmaa newspaper

‘The peculiar nature of life in a circus and the demands of Nazism collide in a heart-wrenching way.’ – Kainuun sanomat newspaper

‘Zircco Fantastico is a splendid novel. Elstelä brings a pinch of magical realism into the circus squeezed by the Nazi rule’. – Keskisuomalainen newspaper