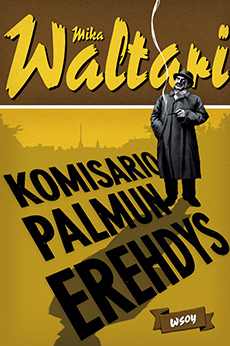 Bruno Rygsack, a rich, young man who is due to inherit a huge fortune, is found dead following a dinner party. Inspector Palmu doesn’t believe that he slipped on a bar of soap, instead suspecting that he may have been murdered. The more Inspector Palmu probes, the more hostile the party guests become.

It soon emerges that the party was in fact a crime-themed party, and the night in question involved theft, forgery and poison. Inspector Palmu, along with his partners Virta and Detective Kopp, take it upon themselves to solve the mystery, interrogating a wonderfully diverse assortment of characters.

Inspector Palmu’s Mistake is characteristically morbid and philosophical. It is by no means a straightforward whodunit, rather it is a story that takes many twists and turns and keeps readers guessing until the very last page.

Inspector Palmu’s Mistake was turned into a film in 1960 by Matti Kassila. In 2012 it was voted the best Finnish film of all time by the Finnish Film Critics and Yle.

“The characters in this book are a deliciously diverse bunch… Inspector Palmu is the kind of character who would hit headlines today. He is self-centred and domineering and enjoys free lunches almost as much as he enjoys hitching free lifts. But he is also smart, and he always seems to be one step ahead of his assistants… I recommend you read it.” – Elämä on ihanaa blog