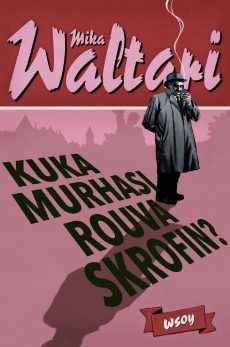 Inspector Palmu, a gruff 60-year-old who works for the Helsinki Police Department, is perhaps Finland’s most loved detective character. In this biting murder mystery, he sets out to solve the murder of Mrs. Skrof, a rich and unpopular widow who is found dead in her Helsinki flat following a gas leak.

Although his junior detective, the book’s protagonist, thinks it was an accident, Inspector Palmu is not so sure. His list of suspects includes Kirsti, Mrs. Skrof’s stepdaughter; Kalle, an acrobatic pilot; Kurt, a surrealist painter; and Pastor Mustapää, the charismatic leader of an extreme Protestant sect. Inspector Palmu visits each of his suspects in turn in an attempt to piece together an account of what happened to Mrs. Skrof.

Offering readers a chance to explore a pre-war Helsinki, Mika Waltari’s much-loved murder mystery is considered a cult classic in Finland. The relationship between Inspector Palmu—who has a weakness for damsels in distress—and his junior has been likened to Doyle’s Watson and Holmes. Who Murdered Mrs. Skrof? is the first book in a trilogy that follows Inspector Palmu and includes Inspector Palmu’s Mistake and It is Written in the Stars, Inspector Palmu!

Who Murdered Mrs. Skrof? was made into a film in 1961 by Matti Kassila and a play for a summer theatre in Tampere in 2017 by Joel Elstelä.

“…a fast-paced murder that takes place over a day.” – Jokken kirjanurkka blog

“I’m absolutely in love with this book… maybe it’s just because of the great Waltari himself – everything he wrote seems so exquisite to me! His skills are simply impressive. The story was also very well developed and I was quite surprised by the ending. I found the characters interesting and sophisticated… .All in all this book was very memorable and it has become one of my favourites! I highly recommend it!” – Goodreads reviewer