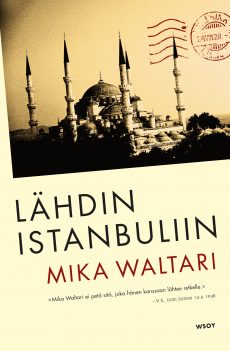 Mika Waltari’s infamous travelogue about his 1948 journey to Istanbul from a post-war Finland.

Travelling through post-war Finland was difficult, but it was something that Mika Waltari insisted upon doing in order to write new historical fiction.

Making his way through Europe with a stack of dodgy visas, American cigarettes, and currency that was difficult to get hold of, Waltari’s Journey to Istanbul tells the story of a brave and determined man.

Journey to Istanbul is often described as one of the best novels depicting a post-war Europe. In it, Waltari writes about the travels he embarked upon prior to writing The Egyptian in order to carry out fieldwork and research. Waltari’s voice is captivating and funny and his cheerful openess draws the reader in.

“[Mika Waltari] captivates the reader with his sophisticated and mature wisdom and his expressive storytelling.” — Alpa Rautasuo blog