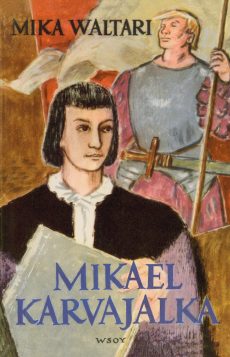 A breathtaking tale of adventure, romance and intrigue

Set in 16th century medieval Europe, The Adventurer tells the storm of Mikael the Finn, who starts his life as a bastard child and relentlessly tries to pursue a better social status. Ultimately, however, Mikael ends up drifting through Europe, rather than being able to steer the course of his own life.

When he becomes an aide to the King of Denmark and betrays his people, Mikael is forced to flee Finland. His travels lead him across the Mediterranean, where he witnesses Denmark’s conquest of Sweden, Protestant reformation and a witch-hunt in Germany, the expansion of the Ottoman Empire in Hungary, and the Sack of Rome during the reign of Pope Clement VII.

Mikael the Finn and Andy, his dim but loyal sidekick, lie, steal and drink their way across Europe, narrowly avoiding numerous scrapes and dangerous. Featuring historical figures including Paracelsus, Martin Luther, and Thomas Muentzer, The Adventurer is a truly compelling historical novel that is filled with suspense, humour and irony.

The Adventurer was published under the title Mikael the Finn in the UK.

“It’s a masterpiece. Gripping prose, plenty of interesting historical detail, great character development, quirky humour, travel across… Europe, thrilling battle scenes… Even the main character’s financial troubles are presented in an interesting fashion. However, the best part may be the endless philosophical, ethical, and theological dilemmas that Mikael faces during his journeys. I’ll start the sequel right away!” – Goodreads reviewer