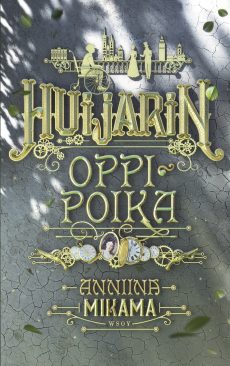 The riveting Finlandia-nominated prequel to The Illusionist & the Thief.

The Conman’s Apprentice takes us to Krakow in 1824, where a young Professor Wiktor takes up a apprenticeship under the mysterious clocksmith Seweryn Król, after a explosion leaves him wheelchair bound.

Under Seweryn, Wiktor learns all sorts of new skills: not just mechanics, but also magic tricks and illusions. But although Wiktor is finally happy, he can’t seem to let go of his feelings for Zofia.

Seweryn and Wiktor embark upon a mission to fix the remnants of the mechanical man they salvaged from Wiktor’s accident, fixing him in their workshop and ultimately naming him Tom. The duo vow to keep Tom’s existence secret.

But Seweryn’s old rival has other ideas and it’s not long before the clockmaker’s past catches up with him. Soon Wiktor is drawn into the increasingly complicated situation too. Will Seweryn and Wiktor come out of it unscathed? Will they manage to keep their mechanical man a secret? And will Wiktor ever be able to stop thinking about Zofia?

“Finnish steampunk-literature is still quite young; it’s a genre with only a few books. Anniina Mikama’s… trilogy is therefore very welcome. The Conman’s Apprentice, which has been nominated for the Finlandia Junior Prize for the Best Childrens & Young Adult title, comes after The Illusionist & the Thief. Instead of being a sequel, it’s a prequel to the previous book, in which we jump back from 1800s Helsinki to the year 1829 in Krakow… Mikama is a smooth storyteller and the entire book feels light-hearted and fun, even when it deals with more difficult topics.” – Helsingin Sanomat newspaper

“The way this book combines many genres gives way to story about love, abolition and truth. The novel itself is like a subtle clock illusion or a magic trick – although there is less magic in this book than in the trilogy’s first. It’s hard to even imagine which spheres the final book will take this story into.” – Hämeen Sanomat newspaper

“A compelling story that merges many different eras in a truly fascinating way. Believable characters face difficult choices, and the reader feels the tension alongside them: will these characters dare to make their own decisions, or will they bow to societal pressure and conform to prejudices? Alongside its adventurous plot, this novel tackles themes including finding your own path in life; the opportunities afforded by, and the dangers presented by, technology; and the power of friendship.” – Announcement of the Finlandia Junior Prize Jury, 2019

“The Conman’s Apprentice dazzled me. Anniina Mikama is great news for Finland specifically and for literature as a whole. I hope these books will be read both in Finland and abroad. It’s downright genius to write a trilogy like this, in which the first and second books can be read in any order.” – Kirsin kirjanurkka literary blog

“As magical as The Night Circus by Erin Morgenstern and Caraval by Stephanie Garber.” – Unelmien aika blog

“You cannot put the book down, and reading it is pure delight.” – Siniset helmet blog

“Mikama adds skilful twists and turns to the novel and wraps the reader around her finger: the girlish romantic elements at the beginning are quickly infused with the classic intrigue of a detective story.” – Lastenkirjahylly literary blog