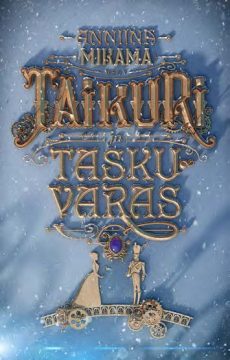 The Illusionist and the Thief

Mina, an orphan, is forced to steal in order to survive on the streets.

Tom is a young inventor and illusionist whose Theatre of Wonders enthralls its audiences night after night.

The two meet in Helsinki in the winter of 1890, and Mina is offered a place in Tom’s household as a maid and a companion to Professor Worowski, Tom’s old, wheelchair-bound friend. She also soon becomes part of the show in which Tom’s mechanical contraptions magically spring to life.

Tom and Mina discover that they are more to one another than mere friends, but both are troubled by dark, inexplicable things in their pasts. They are caught up in a whirlwind of scheming and pursuit, which only their courage will help them to overcome — and the odd magic trick up their sleeve.

‘The book is packed with surprises and illusions accompanied by a dash of magic and romance. Readers are kept at the edge of their seats through to the last page by the riveting twists in the plot in the masterfully depicted historical setting. This debut fantasy fiction in the spirit of Steampunk impressively mixes the past with the future.’ —The Topelius Prize Jury

‘Mikama’s novel merges multiple literary genres seamlessly. It includes elements of dystopia, romance, fantasy, history and detective novels; all combined harmoniously. The ending makes for a truly exciting, upending reader experience. Richly imaginative, evoking the spirit of the past with a plot that includes many twists and turns, the narrative pulls the reader in. All of this combined makes for a truly accomplished debut. Though it is written for young adults, this books is also perfect for adults.’ – Savon Sanomat newspaper

‘As magical as The Night Circus by Erin Morgenstern and Caraval by Stephanie Garber.’ – Unelmien aika blog

‘The tension never falters, not even for a moment. The book is filled with twists and turns, both big and small; it utilises elements of thrillers and detective novels; and it even contains crime (quite a few, actually) and punishment. In my opinion, this is without a doubt one of the best Finnish books I’ve read in recent years.’ – Sebastian Musielak, translator of the Polish edition

‘A charming, wonderfully narrated story about making dreams come true, overcoming misfortunes, following your heart, and about magic. The array of perfectly drafted characters and the atmosphere of a 1890’s Helsinki winter, topped off with the rich and colourful language of the era, take the reader to a world where the past meets the future, and steampunk trails hard on the heels of a historical novel’.
– Joanna Rutkowska-Marchewka/Dwukropek (Poland)