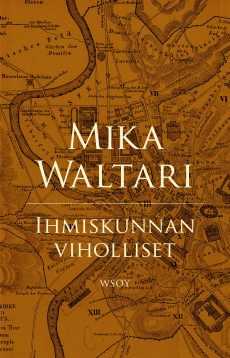 Exploring the early days of Christianity, this is the searing sequel to The Secret of the Kingdom

The Roman is narrated by Minitus Launsus Manilianus, a Roman living during rhe time of Emporers Claudius and Nero and the son of Marcus from The Secret of the Kingdom. The novel follows Minitus as he travels from Corinth to Jerusalem, via Britain and Rome in the pursuit of fame, whilst trying to avoid getting caught up in any political entanglements. Things go wrong for Minuitus when he befriends the capricious emperor Nero and becomes his advisor. Minitus’s true colours shine through when he watches the killing of his own son and does nothing to help, even seeking to justify his lack of action retrospectively.

Alternating between being laugh-out-loud funny, gut-wrenchingly tragic, and philosophical, The Roman is a fascinating story about the Roman empire and the beginning of Christianity. Like many of Waltari’s historical novels, it has been praised for its historical accuracy.

“The Roman contains so much freshness and vigour it seems to explore new territory.” – The New York Post