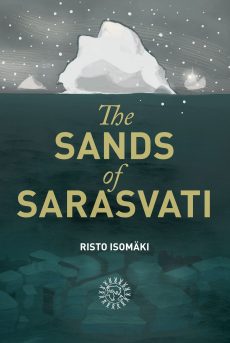 The Sands of Sarasvati

A visionary eco-thriller about a man-made environmental catastrophe.

Meanwhile, scientists realise that a huge meltwater lake has formed inside the Greenland ice sheet. Is the ice sheet about to slide into the ocean? Are our own cities in danger of becoming the New Atlantis?

The Sands of Sarasvati has been translated from Finnish to nine other languages. It has inspired debates and votes in the European parliament as well as three plays, a major international feature film project, a comic book, multi-media art installations, music, short radio plays, and several serious research projects. In 2009 Isomäki’s graphic novel adaptation of The Sands of Sarasvati won the Finlandia Prize for comics.

Risto Isomäki (b. 1961) is a writer, science journalist and leading expert on environmental threats. His science fiction novel The Sands of Sarasvati was nominated for the Finlandia Prize and won the Tähtivaeltaja Prize in 2005. It has been translated into 10 languages. Isomäki is a well-known environmental activist who has published many non-fiction books about environmental responsibility, development corporation, and developing nations. In 2009 Isomäki was awarded the Warelius Prize from the Finnish Association of Non-Fiction Writers.

2005, Winner of the Tähtivaeltaja Prize
2005, Nominated for the Finlandia Prize

“The Sands of Sarasvati is an eco-thriller of apocalyptic proportions, which culminates in a giant flood. The book is both topical, and frighteningly believable. It is a lesson in how our melting of the polar ice sheets may trigger a tsunami that threatens the entire globe. Isomäki’s thought provoking and captivating thriller is flooded with cultural and historical knowledge, and with old wisdom from the East.” – Finlandia Prize judges panel

“The Sands of Sarasvati is a cleverly written thriller which goes many levels deeper than just the prospect of an environmental catastrophe.” – Kansan Uutiset newspaper

“The Sands of Sarasvati is a frightening thriller because its set-up is so very real. This book must be commended for the way that it handles a difficult subject, and explains the complex causative chain to the reader. At long last, we get to read a literary work that has a lot to say. The Sands of Sarasvati is a significant contribution to the ongoing dialogue about climate change.” – Parnasso newspaper

“Thanks to its subject and the way it is written, The Sands of Sarasvati is one of the key books of this autumn. As a narrator of the movement of snow and ice, Isomäki is as captivating as Peter Hoeg was in his novel Smilla’s Sense of Snow.” – Aamulehti newspaper

“Risto Isomäki is serious, he has a mission… Isomäki is a harsh critic of civilisations and he juggles the tensions between people and the forces of nature masterfully.” – Kaleva newspaper

“The thing that draws you into this novel is the author’s expertise… The heroes of the book are scholars, whose research leads them to moments of tension and excitement. This book allows the reader to develop an extensive knowledge about the history of the earth, natural phenomena, the birth and development of civilisation, the structure of space, and the riddle of Atlantis.” – Rising Shadow literary blog

“The Sands of Sarasvati paints a scary and believable vision of the future, in which a flood threatens humanity. Perhaps most scary of all is the fact that the book is based on real facts and real threats.” – Kirjavinkit literary blog