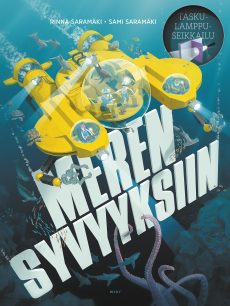 Flashlight Adventures: Into the Deep Sea

Turn on your flashlight and let the adventures begin!

The exploration vessel Lobster starts its engines and sets off on a mission to explore the secrets of the deep sea. Along the way, the crew admires many medusas, squid and cleaner fish. But as soon as they reach the depth of 20 metres, the submarine’s rudder gets stuck. And they can no longer steer the vessel! Help, mayday!

The Flashlight Advetures exemplify a totally new picture book concept, which invite the reader to search and expore. Light up its pages with a flashlight and the book’s hidden images will mysteriously glow. The depths of the sea are sure to reveal surprises that no one has seen before.

The Flashlight Adventures series will include one new book release per year. Upcoming stories will see our fearless explorers perform an archaeological excavation, conduct a mountain rescue operation and explore a city’s underground tunnels during a major power cut. Although their stories are fictional, these books are factually accurate and perfect for any 4-8 year-old with a curious mind!

Sami Saramäki is an award-winning illustrator whose work has been featured on milk cartons, adverts and book covers. Riina Saramäki is famous for her arts and craft books. Into the Deep Sea is her first children’s book.

Nominated for the Runeberg Junior Prize, 2018

‘A children’s book with a new concept that takes the reader on an adventure deep at the bottom of the ocean. This entertaining and exciting story is infused with a lot of interesting information in a way that won’t seem dull to younger or older readers. Amidst the octopus, crayfish and coral reefs, there is unfortunately also trash. The images illuminated by the reader’s flashlight offer a completely new dimension and inspire interest in both reading and the subject matter at hand. There’s no shortage of things to explore in this book.’ – Statement of the Runeberg Prize Jury

‘The illustrations are beautiful, but they also show the harshness of the deep sea and the terrifying ugliness of the trash vortex.’
– Maaseudun tulevaisuus newspaper

‘Into the Deep Sea is written in the form of an adventure story, but it also contains a great deal of facts about oceans and their ecosystems. The book is easy to read and a perfect fit for children interested in adventures. (…) The adventure is made particularly exciting and realistic by the fact that readers can illuminate the pages of the book by shining a flashlight behind them, like the bright light of a research vessel, revealing spectacular aquatic animals before their eyes.’ – Luetaanko tämä blog

‘The illustrations, with their skilful use of varying shades of blue and their light effects, are undeniably effective in creating the feeling of a magical undersea world.’ – Lastenkirjahylly blog