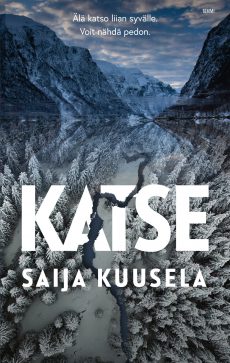 From debut novelist Saija Kuusela comes a new psychological thriller series, in the tradition of Stina Jackson and Camilla Läckberg.

Mystery and atmosphere combine as the cold sea winds greet a newcomer Nea Guttorm to the community.

Walking out on her rapidly deteriorating marriage, half-Sámi police officer Nea decides to leave Oslo and move up north, settling in an isolated village between the fjords and the fells. Putting the jealousy and anger of her controlling relationship behind her, Nea can’t think of anything better than embracing the solitude of the mountains by starting a quiet job in the local police unit.

But almost as soon as Nea arrives, the community is shaken to its core when an unidentified man’s body is discovered in an icy mountain stream, with the man’s eyes removed.

The police, with the empathetic and driven Nea Guttorm at the fore, get to work identifying the body and interviewing potential suspects. But as the days stack up, the police aren’t getting any closer to finding any answers. And to make matters worse, Nea finds herself haunted by disturbing memories of her ex-husband and the fights that consumed the end of their relationship. Then, one day, she has a vision of a hand grasping a long-edged knife.

Who does the body belong to? How is almost every witness unreliable? And why can’t Nea shake the uncomfortable feeling that the key to solving the mystery lies within her visions?

Look at Me is a story of passion, revenge, and the burning darkness that resides within each of us. In the tradition of Stina Jackson and Camilla Läckberg, Kuusela masterfully describes the Scandinavian wilderness, taking her readers to some magnificently dark places.

A standalone sequel, Irreversible Acts (Vyöry) will be published in 2022.

‘We are in northern Norway. In Kuusela’s idiom, the poetic and the forbidding alternate along with the terrain. Look at Me is not your ordinary crime novel. In literary expression, it is an extraordinarily ambitious case.”
–  Kansan Uutiset newspaper

‘Stylistically Look at Me is not your traditional light-read crime novel: the language is gorgeous and descriptive. With its atypical approach, the case nudged off-center, and a main character who is not a member of the investigative team, it could well be literary fiction with a substantial frisson of suspense.”
–  Kirjan jos toisenkin blog

‘This debut is rock solid, an exhibit of true skill. Saija Kuusela is a talent and a diamond.”
–  Joukon kirjablogi blog