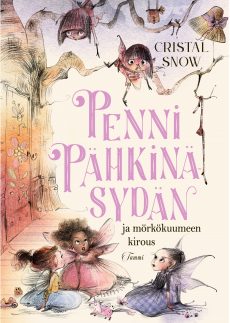 Penny Peanutheart and the Outbreak of Brute Fever

Would you help someone who always makes fun of you?

Penny Peanutheart’s classmate, the beautiful Hilda Honeydew, is everyone’s favourite fairy in the woods.  Pretty she may be, and polite to others but not to Penny! Hilda loves making fun of Penny and it is hurtful. Nonetheless, Penny wouldn’t wish what Hilda is currently going through even on her worst enemy. Adapting to adolescence is hard — even for fairies…

Penny Peanutheart and the Wretched Banishment Cake marked the debut of this new series in Autumn 2020 and was promptly nominated for both Runeberg Junior and Arvid Lydecken prizes in Finland.

This charming series follows the lives and friendships of a fairy girl Penny in Windnest Woods. Penny Peanutheart and the Outbreak of Brute Fever is due in October 2021. The third part in the series is due in 2022.

Finnish edition due in October 2021