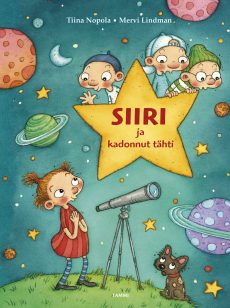 Siiri and the Star

Siri’s father has purchased a telescope and taken up star-gazing.

When he tells Siri that one of the stars is named Sirius, she thinks it sounds just like her. She proudly tells her friends, the three Ottos, that she has her own star, but they don’t believe her and ask Siri to prove it. But what happens when the sky becomes hidden beneath a cover of clouds and Sirius doesn’t reveal itself?

The characters found in the Siiri books are among the most loved in Finnish children’s literature. Siiri is an energetic little girl, and Little Otto, Middle Otto, and Big Otto are her best friends. The Siiri books, created by author Tiina Nopola (b. 1955) and illustrator Mervi Lindman (b. 1971), bring the everyday moments that mean so much to pre-school children to life.