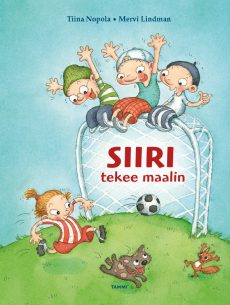 Siri would also like to kick the ball, but the Ottos think Siri is a terrible player. Siri decides to prove them wrong by joining the girls’ league. She is the youngest and smallest person on the team and ends up under foot on the playing field. Middle Otto and Big Otto think that Siri should focus on something more sensible, like paper dolls. But Siri continues playing, even though the star player on the team, Caroline, thinks that Siri’s arrival is a serious setback to the team’s skill level. “Who’s the little girl?” Caroline asks.

When Little Otto hears about Siri’s difficulties, he tries to encourage her. “Little people are nimble,” Little Otto tells Siri. When Siri’s team comes up against the Flash Girls, a team that hasn’t lost a single match, Little Otto teaches Siri a few tricks that surprise her opponents…

The characters found in the Siiri books are among the most loved in Finnish children’s literature. Siiri is an energetic little girl, and Little Otto, Middle Otto, and Big Otto are her best friends. The Siiri books, created by author Tiina Nopola (b. 1955) and illustrator Mervi Lindman (b. 1971), bring the everyday moments that mean so much to pre-school children to life.