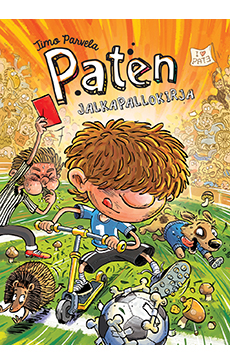 Has Pete taken his eye off the ball?

Pete’s the lovable but slightly scatterbrained boy from the super-popular Ella and Friends books. Now he’s back in another book of his very own!

The Bears, Pete’s football team, are competing in a big tournament, but to his friends’ astonishment, Pete isn’t selected to be the striker! Even though he loves football more than anything else and he’s a brilliant player. But Pete doesn’t take it lying down. Instead, he decides to put together his own squad for the tournament. He wants to line up teammates like Messi, Ronaldo and Zlatan, but they’re awfully hard to get hold of.

Fortunately Pete’s got some new friends who might be able to play – that is, if they can get the tournament entry fee together. A three-legged dog, Pete’s 90-year-old neighbour Eino and the man who collects empty bottles in the park aren’t exactly anybody’s idea of a dream team. But could his enthusiastic teammates have some hidden talents?

2017, shortlisted for the Lese-Kicker Prize (Germany)