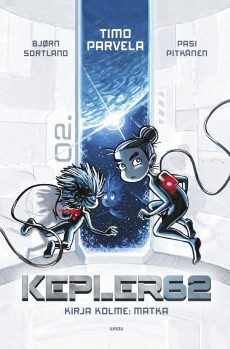 “It’s time. Please be a credit to the human race.” Old General Livingstone bids farewell to the children who’re about to be launched into outer space to look for new worlds that may support life. A shuttle transports the young travellers to a launching pad, where three spacecraft await: the Niña, the Pinta and the Santa María. Olivia, a young doctor, is in charge of the expedition. But Ari suspects they haven’t been told the full truth about the tasks that await them. A long journey into the unknown begins.

2016: Winner of the Blogistania Junior Prize